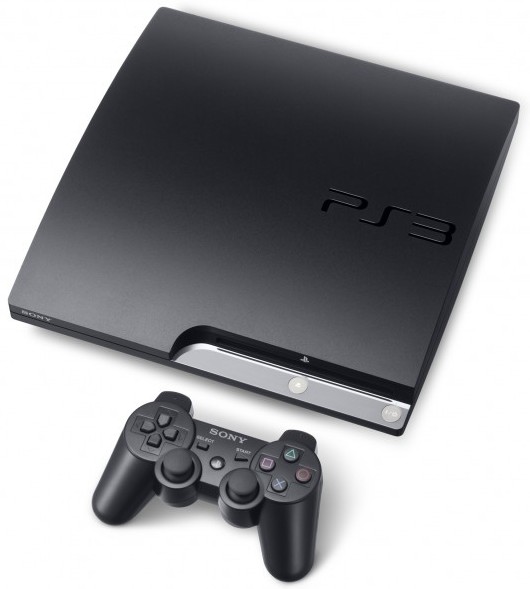 The inclusion of a Blu-ray player means that the PS3 Slim tops our gaming Top 10. In most other respects, Sony’s console is the equal of the Xbox 360, with state-of-the-art hi-def gaming, a 120GB or 250GB hard drive and a growing range of multimedia skills, including the BBC iPlayer app that’s still absent on 360. Blu-ray aside, with so little to separate the big two, a decision can come down to price, exclusive content, controller preference or the format your friends have -although the PS3 Slim’s Blu-ray skills are also boosted by hi-def audio.

Killer Feature: The 3D-ready Blu-ray player is the ace up its sleeve

Verdict: Pips the 360 to the top spot thanks to its high-quality Blu-ray player, but only just

Microsoft Xbox 360 250GB
The gap has been closed on the PS3 with the latest ‘Slim’ Xbox 360. It’s quieter and less power-hungry than before, smaller and (sit down for this bit) finally has built-in Wi-Fi, Now the choice hinges on the 360’s superior online play versus PS3’s Blu-ray.

Apple iPod Touch
The fourth-generation iPod Touch is pretty much up to speed with the iPhone 4, so new additions to its almighty catalogue of casual games can take advantage of a hi-res ‘Retina’ display, twin cameras (one of which is hi-def) and that A4 processor.

Apple iPad Wi-Fi
The increase in screen size over the iPhone opens the door to a new era of gaming Flight Contra/HD and Scrabble only hint at things to come. We recommend the Wi-Fi edition over the 3G on cost grounds. That way you’ll get more memory for your money

The Wii Motion Plus has pushed Nintendo’s physically challenging console into a new dimension. Suitably equipped, it can track your body movements as it always should have done, while support for the Balance Board keeps on growing.

Yes, this little keypad is still in the chart, but that’s because it’s an essential for all 360 gamers. It adds full QWERTY input to a standard pad without affecting the ergonomics, so you can leave it plugged in at all times. Comes with a headset, too.

Wii Fit Plus & Balance Board

Wii Fit Plus improves on the original with 15 new games and six new training activities. It’s now easier to set up routines and there’s a calorie counter too. The Balance Board hasn’t changed, so if you already have that, just pick up the software for around £20.

The Wii’s motion-tracking ability was never ace, but this add-on vastly improves the Wiimote’s accuracy. It’s currently bundled with the brilliant Wii Sports Resort, but you’ll need one for each controller. Check for compatibility as older games won’t support it,

Microsoft’s voice-activated, motion-sensing controller trumps Sony’s Move with its controller-free, futuristic tech. but at the moment is sorely lacking any must-play games. There’s lots of potential, but right now the Wii wins on software alone

The motion-sensing add-on for Sony’s PS3 is capable of some amazing things beyond the predictable racket-swinging games, but as it stands, those are still in the domain of unreleased tech demos, many of which we’ve tried and been rather impressed by.