Trending
You are at:Home»Gadget News»Samsung’s New Foldable AMOLED Display
By Gadgetman on May 16, 2011 · Gadget News 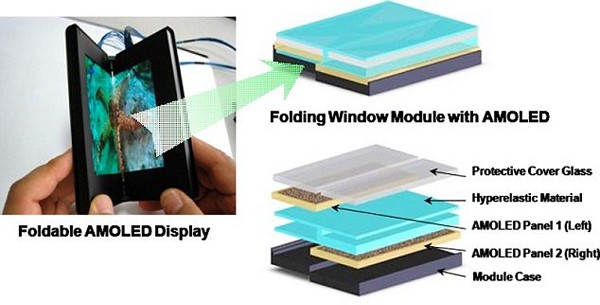 Samsung unveiled a number of fascinating AMOLED display screens at this year’s CES held in Las Vegas. Some included a 4.5-inch flexible and 19-inch transparent display. Unfortunately, none of these will be made available commercially in the near foreseen future.

Despite this, technology does not come to a stand-still.

Sammy’s Advanced Institute of Technology is now in possession of a prototype foldable display. Its two panels have a closing radius of 1mm, which means they practically touch when closed and yet still shows no signs of creases when opened.

The developers of this technology performed 100,000 folding-unfolding cycles in testing the technology. The results were a 6% decrease in brightness, which was enough to be visible to the human eye. Amazingly, despite this number of tests, there were still no signs of creases when opened.

They made use of commercially-available silicone rubber, and the prototype featured a protective glass cover, which could also function as a touchscreen.

We are sure that there exists a market for touchscreens, which a user can fold up and place inside a pocket, and we do hope that Samsung could bring this technology to the market rather sooner than later.