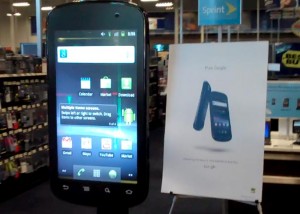 Unlike previously produced by Google huge Nexus One (with just played a looping video), this one is powered by a real Nexus S which is equipped with special video-out capabilities.

The Google says that this giant model is a test for now and if everything will go well with this huge device presentation, they have a plans to roll-out more Nexus S giants to many more Best Buys soon.

Here is a video from techcrunch.com