Trending
You are at:Home»Gadget News»Motorola Xoom heads to Europe
By Gadgetman on Feb 21, 2011 · Gadget News 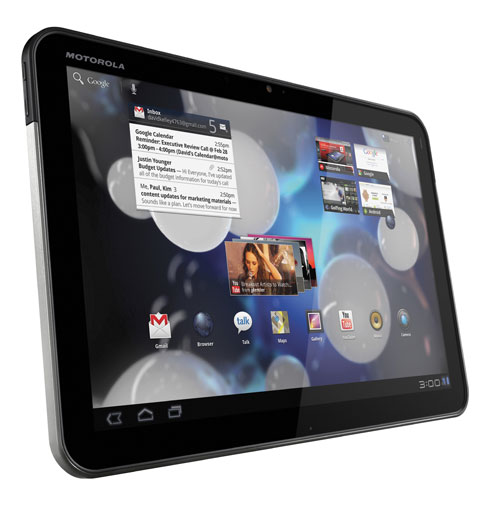 Motorola announced at the Mobile World Congress they are bringing their new Motorola Xoom to Europe. According to the announcement, Motorola Xoom is a tablet pc that features 3G networking and WiFi and runs on Google‘s Android 3.0 Honeycomb. It is the first tablet to offer Android 3.0.

Motorola Mobility Vice President of Marketing Andrew Morley released a statement regarding Motorola Xoom’s debut, “We’re excited to be bringing a device as powerful as Motorola XOOM to leading carriers and partners in the U.K.,” he stated. “Today’s announcement is testament to how well Motorola XOOM has been received by consumers and carriers alike.” The tablet pc will go on sale in stores around the U.K. such as Dixons Retail Plc., Best Buy and the Carphone Warehouse.

Chief Commercial Officer for The Carphone Warehouse and Best Buy released a statement regarding the announcement, “2011 will be the year of the tablet. Demand for tablets has already been greater than expected and the next 12 months will see them being adopted by more and more people as new products are unveiled. The Motorola XOOM sets the bar incredibly high – its functionality and ground-breaking features mean it offers one of the richest user experiences I’ve ever seen.”

Jeremy Fennel who serves as category director for Dixons Retail Plc. echoed the statements regarding the rising demand for tablet pcs, “The tablet market is taking off in a big way. As the leading retailer in this market, we are delighted to be at the forefront again with Motorola and pleased to be able to offer XOOM Wi-Fi to our customers,” he said.

Continuing, Jeremy Fennel stated, “Motorola XOOM is the first tablet to offer Android 3.0, which has been specifically developed for tablets and brings a whole new computing experience. We are sure the XOOM will delight our customers – enabling them to enjoy benefits such as Internet, gaming, keeping in touch via email and video chat, and the ability to download all the apps that Android tablets provide.”