Trending
You are at:Home»Gadget News»ViewSonic to debut ViewPad 10 Pro at Mobile World Congress
By Gadgetman on Feb 11, 2011 · Gadget News 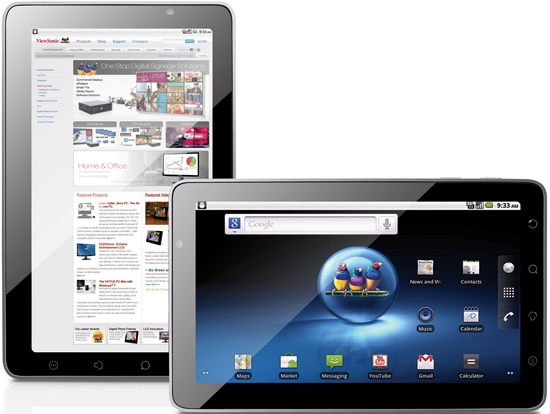 ViewSonic will debut their new tablet pc the ViewPad 10 Pro at next week’s Mobile World Congress conference held in Barcelona, Spain. The conference runs from February 14-February 17 and ViewSonic is giving a brief look at some of their soon coming arrivals.

The ViewPad 10 Pro is a 10 inch tablet that features dual-boot functionality and has capabilities of booting both Android 2.2 and Windows 7 Professional. The tablet has a 1024 x 600 LED backlight multitouch screen and the battery life is reportedly six hours. It has built in 3G, Bluetooth and WiFi and follows the ViewPad 10S. Consumers got a good look at the ViewPad 10S at last month’s CES; but already the ViewPad10 Pro is getting a better reception. Prices and a date for release have not yet been given but will be announced during the MWC conference.

Additionally, ViewSonic announced they will reveal the new V350 Smartphone at the conference as well. The V350 smartphone features a 3.5 inch HGVA touch screen and runs on Android 2.2. The smartphone boasts a five megapixel camera, GPS, WiFi, Bluetooh, a slot for a microSD card, and has dual SIM features.

Product Marketing Manager at View Sonic Europe spoke about the new products, “Last month Deloitte predicted, in its annual sector forecast, that UK companies will buy more than 10 million tablet devices in 2011. ViewSonic is well placed to capitalize on this market and offers users the best of both worlds from one device.”

Continuing, he spoke about the V350 Smartphone, “Our V350 Smartphone is one of the most functional Dual-SIM phones on the market. With Android GMS for access to more than 200,000 Google applications, it has powerful multimedia capabilities and with both SIM cards active, you can place and receive calls on each at any time. The Dual-SIM proposition is compelling and will generate considerable market uptake this year.”