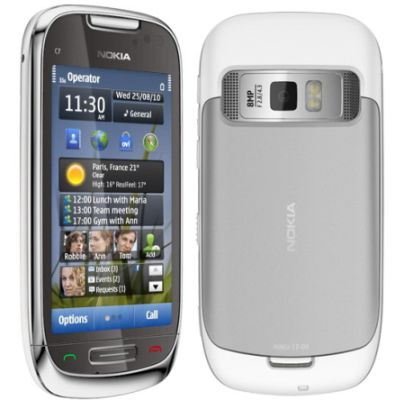 On March 22, 2011, Nokia announced a new smartphone coming for T-Mobile USA customers on April 6, 2011. The Nokia Astound features an 8 megapixel camera with dual LED flash and a 720 HP video camera ensuring that those who wish to use video and photo capabilities have more than enough power. The display is a 3-5inch capacitive touch screen AMOLED display that includes a think, protective layer of damage resistant glass.

Using Ovi Maps1, the Nokia Astound has a free map system that is preloaded on the smartphone and features free turn-by-turn navigation. There are also thousands of apps available for users from the Nokia Ovi Store.

The Nokia Astound also features a number of social media networking services ensuring that you can connect with your family, friends or business contacts easily and quickly. There are three fully customizable home screens and each gives easy access to Facebook, Twitter or your preferred email service as well as Internet access to browse the web. Other features include games, an entertainment hub with radio, video and other media capabilities.

Vice President of Nokia Sales, Mark Slater released a statement regarding the new smart phone, “As millions more consumers make the switch to smartphones, Nokia is proud to offer an alternative that is not only easy and fun to use, but is also very sexy and sleek, unlike anything in its price point.”
“With a user experience rounded out by Nokia’s Ovi services, including Maps and Store, consumers will be delighted to discover Nokia’s premium design quality with no compromises on services and apps, made affordable with T-Mobile.”

The Nokia Astound goes on sale nationwide beginning April 6, 2011 and is available through retail T-Mobile stores or online. Other stores that will carry the Nokia Astound include Wal-Mart, Sam’s Club, Radio Shack and Costco. The smartphone will retail for $79.99 after a $50.00 rebate and a 2-year plan.