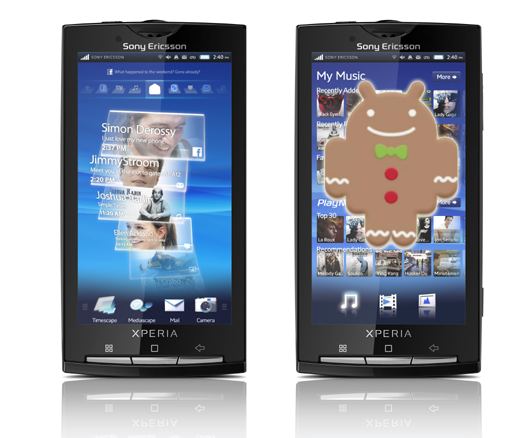 Sony Ericsson has announced that Android 2.3 Gingerbread is coming to their Xperia X10 smartphone this summer. Earlier reports by Sony Ericsson stated that there were no plans to update Experia X10 beyond Android 2.1 and though that was previously the case, it isn’t anymore. An official statement released today reads, “We plan to bring an upgrade to Android Gingerbread for the XperiaTM X10 to generic trade kits end Q2 / early Q3 this year.”

According to the announcement the upgrade to Android 2.3 was based upon consumer request combined with the ability to implement the changes. The update will be available to customers sometime at the end of the second quarter or beginning of the third quarter which should be summer 2011. The Android 2.3 update will be available online through PC based upgrade clients only.

Those who plan to upgrade their Xperia X10 to Android 2.3 should be aware that once they upgrade they won’t have the option to downgrade back to Android 2.1. There are also several features on the Xperia X10 that will cease to function once you make the upgrade. These include smile shutter and facial recognition.

Sony Ericsson spoke about how they bypassed Android 2.2 and jumped right into 2.3. They stated, “Our focus has been on Gingerbread. The work we have been doing on Gingerbread for our products launching in 2011 has given us a solution that made it possible to deliver Gingerbread on XperiaTM X10.”

Additionally, the XperiaTM X10 mini, mini pro and XperiaTM X8 will not have the Android 2.3 update. At this point, there are no plans to update the Xperia X10 beyond Android Gingerbread 2.3.