Trending
You are at:Home»Gadget News»Hulu Plus may be Coming to the BlackBerry PlayBook
By Gadgetman on Apr 25, 2011 · Gadget News 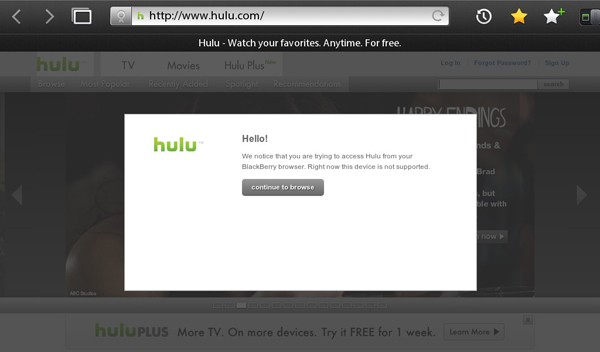 According to a recent report, it appears that Research in Motion is now working with Hulu to bring Hulu Plus to the BlackBerry PlayBook. This comes as no surprise, as Hulu expectedly blocked PlayBook users from streaming free Hulu.com content through the PlayBook’s browser.

According to confirmation received by PCMag from RIM, they are indeed in talks with Hulu to bring a subscription service to BlackBerry PlayBook users.

Just days after the PlayBook hit stores, Hulu started blocking user access to its services on Thursday. It is known that Hulu traditionally blocks non-desktop access on tablets, mobile phones and set-top boxes in an attempt to encourage subscription to its ‘Hulu Plus’ service for $7.99 per month.

Currently, only selected devices support Hulu Plus, like the iPad, iPhone, Sony Bravia 2010 television sets and Sony Dash viewers. Hulu also said at the CES in Las Vegas, that it plans to bring the services to Android devices like the Samsung Galaxy S.

Hulu Plus offers viewers access to full seasons of television seasons, with no commercial breaks. It also offers a variety of other viewing entertainment to subscribers.

With the BlackBerry PlayBook just released, it comes as no surprise that RIM would want to get in on the action and offer its subscribers access to Hulu’s content, rather than a message displaying that the devices is not being supported.

It remains a mystery why RIM did not enter into negotiations at an earlier stage.