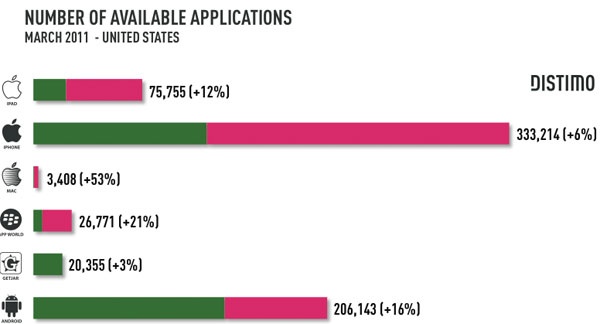 This may come as a shock to many who are following the growth of Android vs. iPhone. Android now have more free apps available to users than that of iPhone!

According to a new study by Netherlands-based mobile analytics company, Distimo, there are now more free apps available for Google’s mobile operating system than the iPhone. The figures show:

This may also come as great news for Android users who hate paying for applications for their mobile devices.

When looking at the figures, one also needs to take into consideration the iPad-only apps. If these apps are included in the figures, the iPhone apps will increase to 132,239 – still less than that of Android.

Apple’s slippage against Android are mainly attributed to its rigorous vetting process according to many tech professionals.

According to Distimo’s report, they expect that Android apps will take the lead over Apple in a mere 5 months time.

The Distimo report can be viewed at: http://www.distimo.com/publications – but, please note that registration is required in order to view any publications.