Trending
You are at:Home»Gadget News»RIM is advancing – Blackberry Touch brings the cloud and full touch to the users
By Gadgetman on Apr 29, 2011 · Gadget News 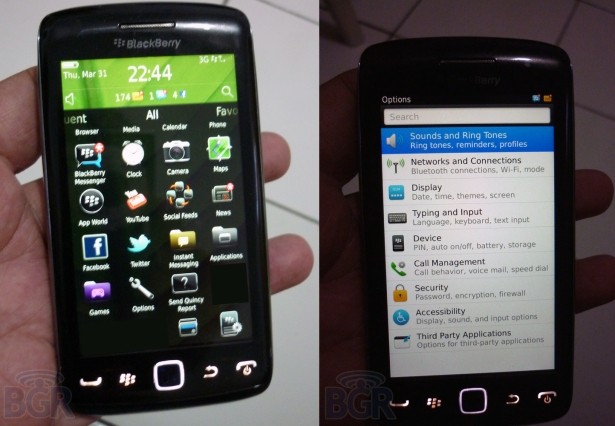 RIM’s Blackberry is losing market share pretty fast, mostly to new Android handsets that can do everything the Blackberries do and much more, while looking better and having more processing power under the hood. But RIM’s CEO isn’t about to give up on the mobile market – especially when Blackberry still has the biggest market share in the business world in North America.

A new direction for RIM means a new generation of smartphones

RIM has been undergoing massive changes in their marketing and production directions to improve their sales, according to various press statements, and we’ll start seeing the results more clearly in a few months. But unlike just a few weeks ago, now we have a real demonstration of these changes in the new Blackberry Monaco/Monza (first one is a CDMA version for Verizon, the second one is for worldwide GSM carriers) – RIM’s “next generation” smartphone, which will most likely come out under the Blackberry Touch name/brand, though that’s still uncertain.

The new device shows us that Blackberries of the future will be more like their Android and Apple counterparts – easier to use for novice users and consumers, more powerful and autonomous, while still retaining the business capabilities that kept it the flagship of the corporate world for so many years in a row.

The new Touch is a full-touch smartphone, which retains the looks and style of a Blackberry while being more functionally close to an Android phone – there is a nice, big 3.7 inch, 800×480 pixels display on the front with 4 navigation buttons and a touchpad below it and a 5 megapixels camera on the back with autofocus (don’t laugh, it’s a step forward for Blackberry 🙂 and support for 720p video recording.

Internal hardware is also on a decent, modern level: the Touch is powered by a 1.2 GHz processor and a new GPU that supports OpenGL ES 2.0, hardware video decoding and 3D acceleration – that should bring it on the same level as the iPhone 4, T-Mobile G2 and HTC Thunderbolt, for example, which is definitely not bad.

The processor and graphics adapter are accompanied by 512 MB of RAM and 8 GB of internal storage memory, as well as a whole lot of tech features, from support for Wifi N and Bluetooth to a proximity sensor and integrated magnetometer (compass).

Another major change for Blackberry is in the OS – RIM is betting on the move to cloud computing, and the new Blackberry OS 6.1, users will have to use their current or new Blackberry ID, as opposed to the old PIN, which would make it possible to create a tighter integration between the handset and cloud services. Users will now be able to backup their data and work with files from remote servers much easier, or at least that’s the theory.

The Blackberry Touch will be coming out this summer, together with the Bold Touch and other RIM smartphones, and it looks like it will be the most attractive of them for the general populace, including a lot of young business owners and entrepreneurs who find the old Blackberry keyboards and small screens annoying, but like the business features the company provides. I guess we’ll have to wait and see how RIM will change over the next months – if it doesn’t, they’ll definitely fall into oblivion just like Windows Mobile once did.