Trending
You are at:Home»Gadget News»Samsung Electronics considering to lodge a counterclaim against Apple
By Gadgetman on Apr 19, 2011 · Gadget News 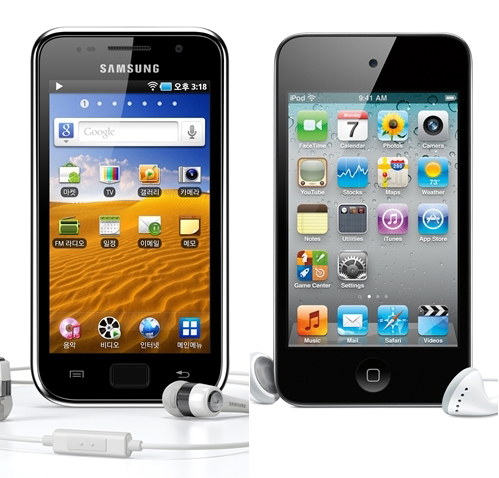 After Apple filed a lawsuit last week with a U.S. district court claiming that Samsung Galaxy Tab and Galaxy phones copied the iPhone and iPad mobile software and other patents of the iPhone and the iPad, Samsung Electronics considering to lodge a counterclaim against Apple.

The Wall Street Journal broke the news that on April 15, 2011, Apple Inc. filed a patent lawsuit against Samsung Electronics Co. Ltd., for copying the style, look and overall design of their iPhone cellular smartphones and iPad tablet pcs. The lawsuit was filed in the United States District court in Northern California and alleges trademark, patent infringement and accuses Samsung of practicing unfair competition.

Since Samsung released their Galaxy S 4G, word in the blogosphere as well as the street has been that the smartphone bore a striking resemblance to the iPhone. Apparently, Apple agreed that the phone had much in common with their own line of products and has stated in the lawsuit that Samsung copied their design down to the icons used on their smartphones. Apple had won the patents in 2009 and 2010 and those patents cover the basic design of the icons. Apple is seeking punitive as well as actual damages.

The lawsuit states, “Rather than innovate and develop its own technology and a unique Samsung style for its smart phone products and computer tablets, Samsung chose to copy Apple’s technology, user interface and innovative style in these infringing products.” The lawsuit includes the following Samsung products: Galaxy S 4G, Epic 4G, Nexus S and the Galaxy Tab.

Early last week Apple spokesman Steve Park said: “It’s no coincidence that Samsung’s latest products look a lot like the iPhone and iPad, from the shape of the hardware to the user interface and even the packaging. This kind of blatant copying is wrong, and we need to protect Apple’s intellectual property when companies steal our ideas.”

Being a Samsung’s client itself, Apple in it’s complaint demands cash compensation and block the use of its patents in Samsung’s mobile devices.

Samsung responded to the filing and released a statement through spokesperson Kim Titus, “Samsung will respond actively to this legal action taken against us through appropriate legal measures to protect our intellectual property.”

Next week, Samsung releases it’s new version of Galaxy S smartphone in South Korea and plans to ship this phone to the World in May, so it could very well be that Apple’s claim is not a coincidence but intensive competition for domination in the lucrative mobile market.