Trending
You are at:Home»Gadget News»Entourage Shuts Down Edge Content Store
By Gadgetman on May 24, 2011 · Gadget News 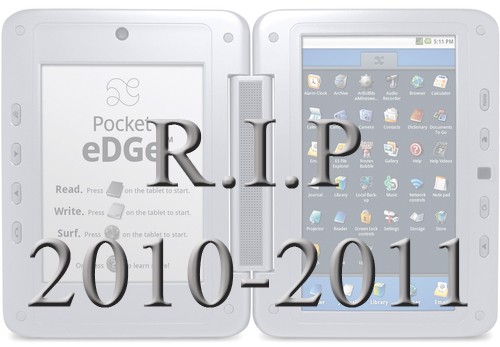 When the combination touchscreen / e Ink Dualbook was first introduced, many users wondered whether this device would catch on to the market, especially with a price tag of $500 hanging on its neck.

Well, it did not, but its successor, the Pocket Edge, did come into the market with a more affordable price tag. Unfortunately, none of these devices were updated with applications and neither had received support for updates beyond Android 1.6.

Today it was announced that the Edge store has finally closed, offering customers the opportunity to download purchased content until May 27.

In its good-bye message the company pointed visitors to the Amazon app store and stated that they will be getting access to Android Apps that Google would never give users. This clearly shows the bitterness.

According to rumors, the team is already busy working on a new device, but this time they may be focusing on a tablet model.