Trending
You are at:Home»Gadget News»LG Optimus Pad Available at Rogers May 17
By Gadgetman on May 15, 2011 · Gadget News 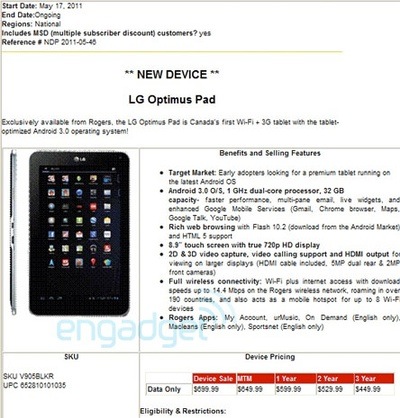 The LG Optimus Pad already made its appearance on the European continent, and now it is on its way to the United States of America and will make its debut via Rogers in Canada.

According to a leak sent to Engadget, Rogers will be the exclusive carrier of the tablet, known as the G-Slate in the United States.

The 8.9-inch Honeycomb tablet will be available in North America at a hefty price tag of $700. With a data plan, the price will range from $450 on a three-year contract to $650 on a month-to-month contract. A one-year contract will avail the tablet at a price of $600.

The device is expected to hit the shores on May 17.