Trending
You are at:Home»Gadget News»New Nook App Update Available
By Gadgetman on May 24, 2011 · Gadget News 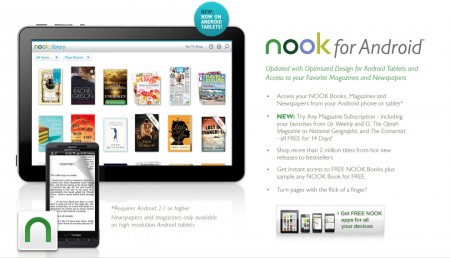 Barnes and Noble announced that its Nook app for Android received an update for devices running on Android 2.1 and higher. The new update will allow users to subscribe to publications and download single issues directly from their tablets.

Once the update is done, users will notice a new magazine section in the application’s shop. Here users can purchase, download and read subscriptions.

The new update will address a few bugs on the HTC Thunderbolt and add support for tablet users on Honeycomb.

The company also announced that they will be making a big announcement later this month. We were left hanging in the air as no further information was provided. So, let’s wait and see what B&N will bring our way!