Trending
You are at:Home»Gadget News»New Record for Data Rate Through Fiber
By Gadgetman on May 23, 2011 · Gadget News 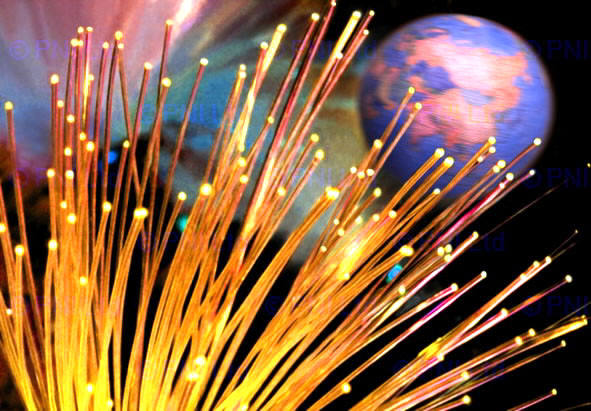 Researchers have set a new world record for the rate of data transfer by using a single laser – 26TB per second. According to the researchers, the trick is to use what is known as a “fast Fourier Transform” to unpick more than 300 separate colors of light in a laser beam, each one encoded with its own string of information.

Earlier optical fiber technologies used to encode a string of data as “wiggles” within a single color of light which was sent down a fiber. Newer approaches have made use of new methods in order to increase the data rates. One of these methods is orthogonal frequency division multiplexing, which uses a number of lasers to encode various strings of data on different colors of light. These are all sent through the fiber together.

At the receiving end, another set of laser oscillators will then be used to receive these light signals and then reverse the process.

The problem, however, are that there are costs involved. The total data rate possible using such schemes is limited only by the number of lasers available.

According to Wolfgang Freude, a 100TB per second experiment has been demonstrated. In this experiment, researchers made use of 500 lasers, which was incredibly expensive.

Instead, Freude and his colleagues worked out how to create comparable data rates making use of just one laser with exceedingly short pulses. According to him, within these pulses are a number of discrete colors of light, known as a “frequency comb”.

According to the researchers, when these pulses are sent to an optical fiber, the different colors can add or subtract, mixing together and creating a number of around 350 different colors, which can be encoded with its own data stream.

At the receiving end the researchers made use of an optical fast Fourier transform to unpick the data streams as traditional methods to separate the different colors will not work here.

According to information, the Fourier transform is a well-known methodology that can extract the different colors from an input beam, based solely on the times that the different parts of the beam arrive at the receiving end.

The research team did this optically by splitting the incoming beam into different paths that arrive at different times, recombining them on a detector.

It will be interesting to see this technology implemented in our modern-world devices! It will surely place us in a new generation of data management and transfer on various levels of technology!