Trending
You are at:Home»Gadget News»Samsung Droid Gets Minor Update
By Gadgetman on May 16, 2011 · Gadget News 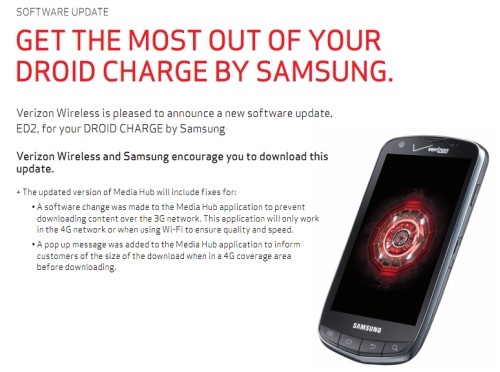 The Samsung Droid Charge has just been released to the market and already there is an update available. Many may wonder what the update is for and why so quick.

Well, Samsung announced that the update is merely a tweak for their Media Hub application that disables downloads over 3G. Many Droid Charge users may not be happy with the update, which means that if you do not live in an LTE market, you will need to be tied to a Wi-Fi hotspot in order to get your multimedia from there.

Verizon claims that the new update is a compromise to ensure they deliver quality and speed to their clients.

Thunderbolt, after which users can expect to pay $20 per month for the Wi-Fi tethering privilege.