Trending
You are at:Home»Gadget News»Samsung Galaxy Tab 10.1 – the iPad 2 just got outdone
By Gadgetman on May 5, 2011 · Gadget News 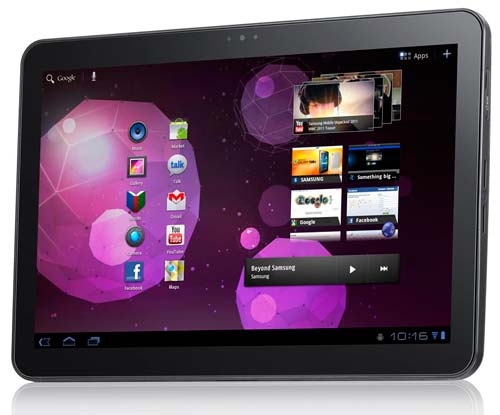 Samsung has demonstrated their own “iPad killer” back at MWC 2011, but that was only a prototype, and it still impressed a lot of people. Now, with the iPad 2 being released, they’ve upped their game and announced two new tablets: the all new and perfectly sized Galaxy Tab 8.9 and its bigger brother, the Galaxy Tab 10.1 – a direct competitor to the iPad 2 and an almost final version of the model demonstrated at Mobile World Congress this year.

Stylish design in a housing slimmer than the iPad 2

On the outside, the new tablet looks very much like the iPad 2 – a lot of people will say that Samsung just copied the design, but it’s not their fault that the design is perfect for a tablet (the Motorola Xoom and just about every other new tablet look the same). Of course, the differences are also visible immediately – first of all, you’ll notice the wide screen aspect of the display and the beautiful edge to edge darkened front glass. The display resolution hasn’t been specified, but I’m pretty sure it’s 1280×800 (like the one on the Xoom). Second, the camera on the back is clearly superior to that on the iPad – it has 5 megapixels and an LED flash – pretty useful for a lot of occasions.

The housing is very slim at only 0.33 inches, which is actually slimmer than the iPad 2 – talk about beating Apple at their own game! The Galaxy Tab 10.1 weighs 1.31 pounds – also lighter than the iPad 2, though definitely not by a noticeable degree. The back is covered with some nice quality plastic that makes the whole thing feel very solid.

Internal hardware to match anything else on the market

Sure enough, the internal hardware of the Galaxy Tab 10.1 match or even outmatch those of the iPad 2. Samsung has used their own dual core platform, which is one of the fastest solutions on the market, right up there with the Tegra 2, TI OMAP4 dual core and of course, Apple’s A5 chip. The processor will run at 1 GHz, while the graphics adapter is still one of the best around and can beat most of the chips out there.

There is 1 GB of fast DDR2 RAM on the tablet, meaning it will be able to hold up to any kind of tasks without a hitch. The Galaxy Tab 10.1 will come with 16 or 32 GB of onboard memory, depending on the model you buy, and will have an external micro SD card slot for another 8-32 GB of memory (or more in the future!).

The best OS for a tablet – Android 3.0 Honeycomb

Of course, such a powerful tablet simply must use the best OS available, and that is Android 3.0 Honeycomb, which was specifically designed for tablet PCs and is optimized for higher resolutions and multi-tasking. Unfortunately, Samsung also uses their own Touch Wiz 4.0 skin on top of the OS, which is a weird decision, as the original UI is very good (not to mention it doesn’t have any bugs or incompatibilities with the system itself).

Samsung sets the tentative release time of the Galaxy Tab 10.1 to sometime this summer, which isn’t very indicative, but hopefully we’ll get it sooner rather than later – and the device it totally worth the wait!