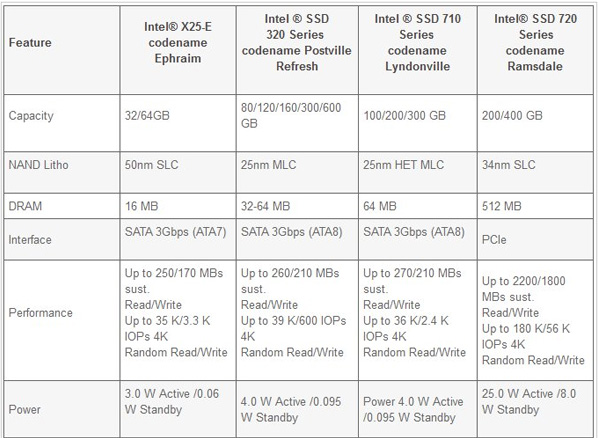 Users may remember rumors doing the rounds back in April when a so-called roadmap was leaked on Intel’s latest 710 “Lyndonville” and 720 “Ramsdale” enterprise SSDs. Not a lot of information was available on these devices, but now Computer Base, a German tech website, got their hands on what appears to be a full specifications sheet on these devices.

From the sheet, the 710, a 25nm HET MLC, will be available in sizes ranging between 100GB, 200GB and 300GB. The devices also claim to have a read and write speed of up to 270Mbps and 210Mbps, respectively. The devices also boast with a 3Gbps SATA connection.

The 720 looks a bit more like a monster with its 34nm SLC chips making up the 200GB and 400GB versions. They also come with a promised read and write speeds of up to 2200Mbps and 1800Mbps, respectively.

The devices are expected to be released in the third quarter of this year.