Trending
You are at:Home»Gadget News»Solar-Powered Charging Stations Will Charge Your Phones in Belgrade
By Gadgetman on Jun 17, 2011 · Gadget News 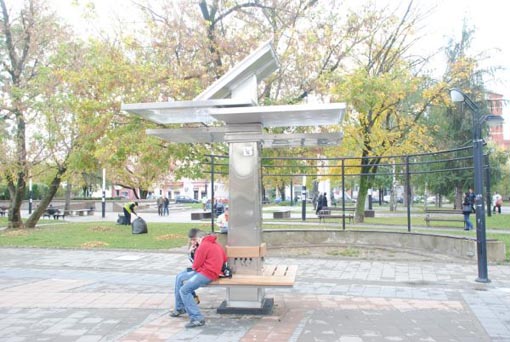 A group of students in Belgrade recently announced the world’s first public charging station, powered entirely by solar energy, which will assist the general public in charging a variety of mobile devices.

Known as the Strawberry Tree, the new solar-powered charging station consists of 16 ports which support a variety of handheld devices. Charging a device will take around 10 to 15 minutes and using the facility is totally free.

The built-in batteries in the station can also store up to a month’s worth of back-up energy, which will enable the station to charge devices even throughout the night.

The Strawberry Tree charging station was unveiled back in November 2010, and within its first 40 days it charged a number of more than 10,000 devices. This is around 10 charges per hour.

The developer behind the Strawberry Tree is Miloš Milisavljevic, who was just 17 when he came up with the idea. Now, at the ripe age of 22, he is looking to plant more stations across other Serbian cities as well.