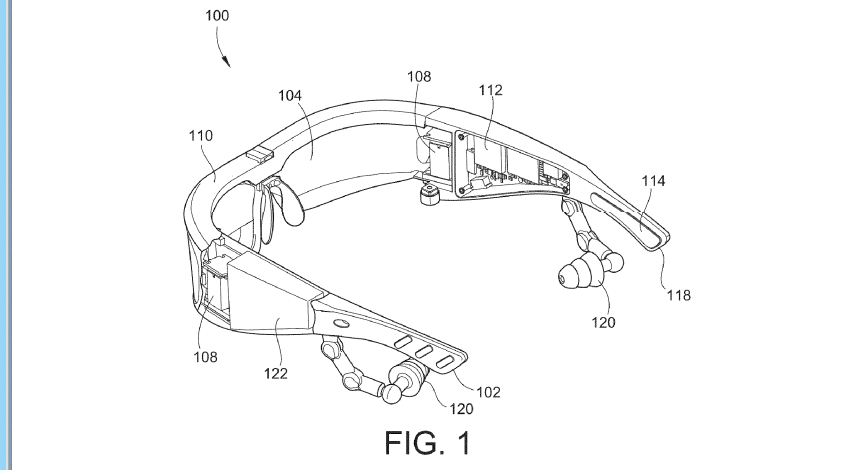 A San Francisco based company has filed a patent titled “SLIDING KEYBOARD INPUT CONTROL IN AN AUGMENTED REALITY EYEPIECE” that has some really interesting concepts for a futuristic optical glasses that will let you look and use them with an augmented reality touch. You wear the device like you do with regular glasses; but with augmented reality touch, you can also view a lot of options running in front of your eyes. The options can be picked through hand gesturing (similar to what we’ve seen on Minority report and other sci-fi movies). The inventors say that not only will you be able to pull information about the place you are viewing and see them at real time, but the glasses will also help in other places like being able to look clearly when it is foggy or being able to view at say, a McDonalds outlet in your neighborhood and instantly view their menu, coupons,etc.

Below are some quotes and images from the patent.

“a system may comprise an interactive head-mounted eyepiece worn by a user, wherein the eyepiece includes an optical assembly through which the user views a surrounding environment and displayed content […] The displayed content may comprise an interactive keyboard control element, and where the keyboard control element is associated with an input path analyzer, a word matching search facility, and a keyboard input interface. The user may input text by sliding a pointing device (e.g. a finger, a stylus, and the like) across character keys of the keyboard input interface in an sliding motion through an approximate sequence of a word the user would like to input as text, wherein the input path analyzer determines the characters contacted in the input path, the word matching facility finds a best word match to the sequence of characters contacted and inputs the best word match as input text. ”

“The head motion characteristic may be a nod of the user’s head such that the nod is an overt motion dissimilar from ordinary head motions. The overt motion may be a jerking motion of the head. The control instructions may provide manipulation of the content for display, be communicated to control an external device, and the like.”

Here is the link to the patent: uspto.gov

Thanks for the tip to Andy from quicknbest.com