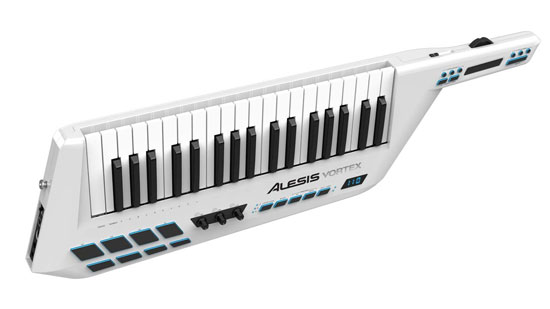 The Alesis Vortex keytar is the new generation of musical instrument. It is the first USB 37-key MIDI sensitive controlled keyboard that has a spectacular design, and adds an accelerometer to the mix. It’s new over the shoulder suspended keyboard allows electrifying interaction between the audience and the keyboard musician. The controls on the neck are for volume, sustain, octave and pitch-bend wheels controls. It brags rapidity sensitive keys with after touch, an assignable touch strip, and eight pads as drums.

The Vortex is compatible with your computer, iOS devices or Mac and includes all the software that Vortex has to offer. The customizable automapping for today’s popular software synths and DAWs allow users to create and use virtually any software. Plugging your keytar to your computer permits you to power up over the USB, which will help elevate some of the weight since it is 6.5 pounds.

The accelerometer allows you to control the MIDI parameter by just a tilt of the device, which allows you to move to rapidly vary the pitch you are searching for. The controls are ergonomically laid out, your thumb controls a volume slider including the MIDI-assignable touch strip and buttons for octave selection and sustain. An un-encumbered tilting helps generate incredible capacity surges, astounding pitch bends, and filter cutoffs.

The Vortex keytar is created for today’s current musician by Alesis the world’s leading manufacturer of instruments. Alesis stands for quality and allows the keyboard player to rule the stage, as they are able to wander and with a motion control any parameter. The Vortex breaks down the barriers to your performance capabilities.

It’s time to experience outrageous, unprecedented keytar performance with the Alesis Vortex. The Vortex eliminates the barrier between you and your audience by giving you the freedom to move around the stage and take the lead. With an extensive layout of touch-sensitive keys and velocity-sensitive pads on its pearlescent white body, and radical pitch and modulation controls on its neck, the Vortex empowers you to rule the stage.

The Vortex is the first keytar to include a MIDI-assignable accelerometer. Now, you can get out from behind your keyboard stand and be just as visual as guitarists and singers with an instrument that will respond to your motion. You’ll be able to create incredible volume swells, amazing pitch bends, vibratos, filter cutoffs and more by tilting the Vortex’s neck in the heat of the moment during live performances.

The Vortex includes even more features never before found on any keytar: both traditional MIDI and USB MIDI are onboard, empowering you to use the Vortex with all of your software instruments and synths on Mac, PC, and iPad*. You’ll have a virtually unlimited palette of sounds, ready to command with one of the most exciting keytar controllers ever.

The Vortex comes ready for instant performance, automapped for today’s most popular software synths and DAWs. Plus, you can customize and create your own mappings for virtually any MIDI software.

Breathe new life into every performance with the most expressive keytar ever produced. The Vortex’s neck controls are laid out ergonomically: your thumb controls a volume slider and pitch-bend wheel while your fingers command nine front-facing controls that include a MIDI-assignable touch strip, and buttons for octave selection and sustain. Large transport and patch-select controls are centrally located on the Vortex’s body for instant access, and synth lovers will be happy to know that the Vortex’s 37 velocity-sensitive keys feature aftertouch to enable instant creative flourishes.

EVERYBODY WANTS TO RULE THE WORLD

But you can rule the stage. The Vortex is for controllerists, for those who want to perform without limitations to their movement or their sound set. The Vortex is bus powered when connected to a Mac or PC, and can also be powered by batteries when used with MIDI modules and iOS devices including the iPad. Standard strap pegs are located on the Vortex’s neck and body, and an adjustable strap is included.

Outrageous keytar performance in a pristine, pearl-white body—the Vortex is the perfect storm of stunning design and incredible performance capability.

Your audience won’t know what hit them.

Connection to iOS devices requires an Apple USB adapter, sold separately as part of the Apple iPad Camera Connection Kit. iPad is a trademark of Apple Inc., registered in the U.S. and other countries.
[/learn_more]