Trending
You are at:Home»Gadget News»CUPP Computing aims to bring Android to any Windows machine with the PunkThis board
By Gadgetman on Jan 30, 2012 · Gadget News 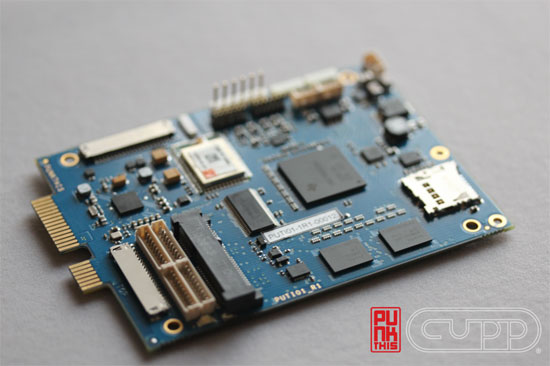 There’s really no shortage of cool products on the market, most of which sadly never see the light of day, but things definitely get more interesting when it comes to Android and more battery life on laptops or tablets. You wouldn’t expect a product that would do that, but CUPP Computing can prove you wrong with their PunkThis board, which is a very interesting solution to say the least.

I don’t know how they came up with the weird name – maybe it’s just a trendy new name, or maybe they believe their product is for pranking your neighbors and coworkers, but the board is more useful than that for sure. This 2.5 inch PCB contains a full-fledged minicomputer with a 1 GHz ARM processor, 512 MB of RAM, two micro SD card slots, a Wifi radio and an mSata slot – an interesting set, to say the least.

So what does it do, exactly? Well, here’s the interesting (and possibly mind blowing) part: it gives you the ability to run Android on any laptop by replacing its 2.5 inch hard drive. That last part may sound a bit bad and defeating the purpose, but stay put – everything is fine thanks to the onboard mSata slot, which can be used to channel an SSD drive into the laptop. If that’s not enough, or you don’t want to shell out for an mSata SSD (which are pretty cheap compared to their 2.5 inch brothers, by the way), you can get a cheap enclosure for installing this thing in place of your optical drive – a perfect solution for a lot of people.

There are a lot of reasons to want this board, which is supposed to cost under $200 when it comes out (although CUPP Computing has been promising it for months now). One of the main reasons is battery life – with this board, you can double, triple or quadruple the battery life of your laptop, depending on what hardware it has inside to begin with (an Atom-based netbook would obviously already have a longer battery life than a quad core monster). And thanks to the thousands of great apps on the Android Market, you can plan your tasks, send and receive emails, watch YouTube videos, write documents, browse the Web and do much more without powering up the main power-consuming parts of your laptop.

The USB ports, audio jack, HDMI out port can also be used, which makes the setup even more attractive. The two micro SD card slots I mentioned provide the storage space – both are seen by the onboard Android OS, but only one can also be seen by the laptop’s main OS (Windows, Linux or any other OS).

The board interfaces using the SATA port’s inbuilt SATA and USB channels, and the switch between an active Windows and Android OS installation is just a hotkey away – if that’s not convenient, I don’t know what is. CUPP also has a custom version for Windows 7 tablets, although that one is for manufacturers who want to give their users the ability to use both operating systems on their x86 tablets. Other potential users would be Android developers who want real hardware to test their apps, but the board is not particularly targeted towards them.

As you can see, the PunkThis board is a remarkable achievement, and an ingenious way to save battery life – imagine having 10+ hours of Web surfing, emailing, Skyping and watching movies on your laptop, while still retaining the ability to do some heavy Photoshop editing if you need to. And with the under $200 price mark, I’m sure this thing could become pretty successful.