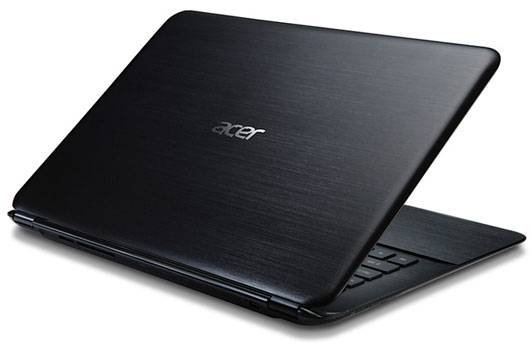 Acer’s first Ultrabook, the Aspire S3, wasn’t very successful or even all that attractive to the average consumer: unlike the shiny metal competition, this all-plastic laptop looks rather simple. It is, however, a great budget Ultrabook, and if the price goes down a bit more, it would make a great purchase for anyone needing an inexpensive ultraportable that can perform at the same level as the more expensive competition.

But Acer is not satisfied with the low end niche, and this year they’ve announced yet another Ultrabook – the Aspire S5 – which definitely fits into the high end profile, bringing several features that are absent on the competition, at a price of course.

The design of the Aspire S5 is pretty unassuming at a first glance, but you notice that the laptop is something special as soon as you take a closer look. It doesn’t remind of the MacBook Air, either, which is a good thing, but the design may seem a bit too simple to some people. The whole housing is made of a magnesium alloy, making it much sturdier than the Aspire S3 and making the extreme 15mm thinness possible, as well. The Aspire S5 is actually the thinnest Ultrabook on the market – it’s very impressive to see just how slim it is!

But Acer didn’t forego any of the important ports that a laptop needs to have – instead, they used a special port panel that opens on the back to accommodate them, since they wouldn’t even fit anywhere else. The company calls it the MagicFlip I/O port panel, which is an accurate name, but the mechanical nature of it can make some people wary since it looks like it can easily break – I don’t think that’s the case under normal use, but I do think it could get damaged quickly if you drop the laptop (then again, the port panel would be the last of your worries in that case).

The selection of ports is good for an Ultrabook, but may be too small for power users – there are two USB 3.0 ports, a HDMI out port, a Thunderbolt port and a 3.5 mm audio jack – that’s pretty much it. The display is a fairly standard 13.3 inch LCD unit with the 1366×768 pixels resolution, which is not all that comfortable for intensive work, but it’s good enough for everyday use. The keyboard is also a pretty standard chiclet style one, with short travel and flat keys, which is good enough for normal use but not for writers, that’s for sure.

The performance of the Aspire S5 should be pretty high compared to the current generation of Ultrabooks thanks to the new Ivy Bridge processors that the laptop will be using. Acer hasn’t confirmed the models they will be using, but it’s safe to assume it will be a Core i5 or i7 or an option between the two. The S5 will also have 4 GB of RAM and a 128 or 256 GB SSD – also standard fare for an Ultrabook. According to the manufacturer, the battery life will be up to three times as good as the S3 (which lasts about 4-5 hours) – that is pretty impressive if it turns out to be true.

The Acer Aspire S5 will be available sometime this spring, most likely in April-May, seeing as Intel will be officially launching the Ivy Bridge processors around that time, as well. The pricing has yet to be established, but judging by the specs, we can expect the S5 to cost around $1000-1200 – not the cheapest Ultrabook, but it may be worth it.