Trending
You are at:Home»Laptop Reviews»Lenovo IdeaPad U310 and U410 consumer Ultrabooks – a decent array of features for a great price
By Gadgetman on Feb 3, 2012 · Laptop Reviews 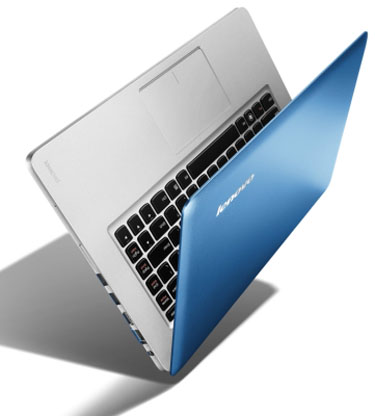 Lenovo has started the year being very active, having announced and demonstrated several tablets, phones and a whole lot of laptops, including Ultrabooks. Alongside the professional ThinkPad Ultrabooks they had at CES 2012, they also announced a couple of consumer level models for those who want a stylish and durable ultraportable but can’t afford the price of the current crop of laptops.

Budget Ultrabooks with a unibody finish

The IdeaPad U310 and U410 are here to fulfill that niche, and it looks like they will be able to do very well, indeed. Both of these Ultrabooks have a unibody construction and a design that very closely resembles the MacBook Pro – I’m guessing that Lenovo saw that Apple doesn’t react to all the copies and decided to go all out on this. I’m personally not complaining (an ultraportable running Windows and costing half the price of a MacBook Air? Sign me up!), but some Mac users and Apple fans might have a problem with that.

As the name kind of suggests, the U310 and U410 have a 13 and 14 inch display, respectively. They look pretty good, but the resolution is the same 1366×768 pixels on both, so the picture is slightly better on the 13.3 inch model because of the higher pixel density. It’s not too noticeable, but it’s there. The keyboard and touch pad are pretty much the same size and style on both laptops, as is the selection of ports for that matter.

Relatively thin and light, with a decent processing power

The IdeaPad U310 is understandably smaller, thinner and lighter – it’s 18 mm thick and weighs 1.7 kg, which is not as good as other Ultrabooks, but the low price and high build quality is worth it. The U410, on the other hand, is 21 mm thick and weighs 1.9 kg, but besides the bigger display, it also adds a dedicated graphics adapter.

The performance in general should be the same on both Ultrabooks, with both having the same options for a processor – a Core i3 or i5 CPU with an integrated Intel HD 3000 graphics adapter and 4 GB of RAM. The storage space ranges from a 64 GB SSD to a 500 GB hard drive, and the battery life is about 8 hours on both models.

The IdeaPad U410 will provide the better 3D and graphics performance, thanks to the dedicated GeForce 610M chip with 1 GB of video memory – you can even play older games in high quality on this card. Both laptops have two USB ports, a HDMI out port, and Ethernet jack, a 3.5 mm audio jack and an SD card reader, which is actually more than some competitors offer.

The U410 will cost $700 in its basic configuration, which is definitely not bad for such a laptop, and the U310 is supposed to have about the same price. The Ultrabooks will also be available in different colors (Aqua Blue, Ruby Red, Sapphire Blue or Spearmint), which is great if you’re tired of the usual gray finish, and they should come to market in the following months (first to the UK, then to other countries).