Trending
You are at:Home»Gadget News»LG Set To Announce L-Style Phones At MWC 2012
By Gadgetman on Feb 21, 2012 · Gadget News 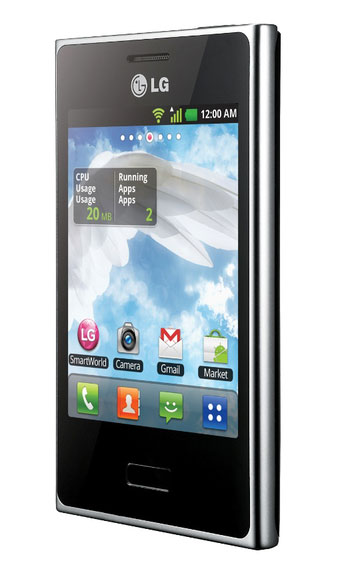 Korean phone manufacturer LG announced three new phones in a press conference today. All three will be running on Android and feature a “floating mass display”. L3, L5, and L7 are expected to make an appearance at the Mobile World Congress next week.

L3 is an entry device which runs on Android 2.3 and has a screen size of 3.2 inches. L5 and L7 are possibly mid-range to high-end phones running on the latest Android firmware, Ice Cream Sandwich 4.0. L5 and L7 will be launched in the first half of 2012. As for L3, it is expected to launch in Europe next month.

LG further adds that the three new phones will feel thinner than their actual thickness – emphasis on the word feel. They have stylish metallic bodies and square frames, reminiscent of their fashionable non-Android phones such as Chocolate and Black Label. The phones have leather-like backs to improve grip and prevent the phone from slipping when held by the hand. Icons also look less-cartoony, a common complaint that kept consumers from buying Android-powered LG phones.

The “floating mass display” isn’t new though. It’s the same display found on Super AMOLED screens of Samsung and give the illusion that things shown on display are floating in reference to the glass screen. Another must-love feature of these phones, especially L5 and L7, is their near-stock ICS user interface. Their UI is a far cry compared to Sense on HTC and Touchwiz on Samsung which cover up the beautiful ICS Holo theme.

L3, L5, and L7 are all part of the L-Style series by LG. It has been made clear that the line-up is all about design and improved user experience. Clearly, these three phones will rock MWC 2012 and outshine others. Maybe by then, LG would reveal more stylish names suitable for their latest creations.