Trending
You are at:Home»Gadget News»LG’s new Google TVs look mighty impressive, and they come in up to 84 inch size as well
By Gadgetman on Feb 1, 2012 · Gadget News 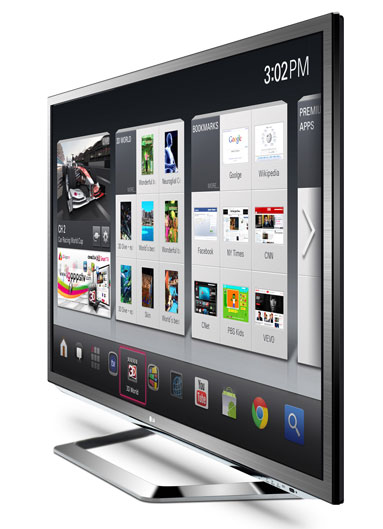 Google TV didn’t get the popularity that the company envisioned, but that was to be expected and there’s still plenty of time. “Smart TVs” are definitely the future, and it looks like 2012 will mark the beginning of the change or even the revolution. Google TV has gone through several major changes, and the latest version is better than ever.

Aside from rumors about LG possibly working with Google on a Nexus TV, the companies actually do have something to show off already. At CES 2012, LG has demonstrated several TV sets running Google TV software and featuring state of the art technologies – the fact that they will actually be released on the market this year makes them even more impressive.

So far, LG has demonstrated two Google TVs that are completely worth the attention: a 55 inch OLED unit and a huge 84 inch LCD TV, both of which support 3D and look simply fantastic. They don’t have an official name yet, but seeing as they’re working as advertised, it’s not hard to imagine they’ll get their designations by the end of the third quarter, for sure.

The 55 inch OLED panel is the thinnest and lightest panel of its size, according to LG, and it would be hard to disagree when you see that it’s just 4 mm thin (less than half a centimeter!) and 3.5 KG. It’s simply amazing when you look at it, and you just want to pick it up and go home, which you could actually do since it’s the same weight as a 17 inch desktop replacement laptop.

The resolution on this TV is of course, the usual 1920×1080 Full HD, and thanks to the OLED technology, the colors look excellent, the contrast and brightness are second to none and the viewing angles are pretty much perfect.

As for the other LCD TV, suffice to say that its 4K resolution (i.e. double Full HD) offers a mind blowing amount of detail, especially considering the 84 inches of space, and the contrast, colors and brightness are all great – not much worse than the 55 inch OLED, actually. Because of the separate backlight, it isn’t the thinnest and lightest 84 incher in the world, but it must be pretty damn close. As the name implies, this Cinema 3D TV also supports 3D – obviously.

What makes them smart, however, is LG’s own chipset, which will feature a quad core ARM chipset and will run the custom Android OS that is at the base of Google TV. Users will be able to navigate through the menus and browse the Web easily using LG’s new Magic Remote QWERTY, which has the most used TV controls on one side, and a pretty nice QWERTY keyboard on the other side – and no, you can’t accidentally press the buttons, as the shape of the remote makes that a bit hard and the QWERTY keys are sufficiently sunk into the housing to make that pretty much impossible under normal circumstances. The Magic Remote is the best solution I’ve seen for smart TVs to date, and hopefully it will be available as a separate purchase for anyone to enjoy.

LG’s Smart Share technology is present on both TVs, and it basically allows you to see two different pictures using the 3D glasses – pretty useful when gaming or if you want to watch a different show while your family watches something else.

LG promises that the TVs will be available this year, and judging by their record of bringing the latest technologies to the market quickly, I’m pretty sure they’re completely serious. I guess we’ll be seeing 4 mm thick OLED TVs in everyone’s house by the end of the decade.