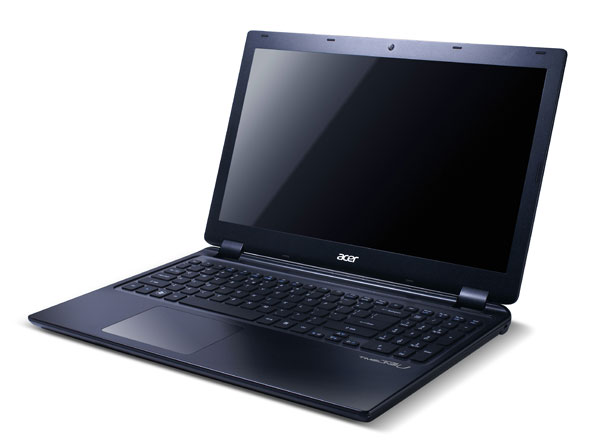 Days ago, Acer brought us the world’s first 15-inch ultrabook with an optical drive and a dedicated graphics card – Aspire Timeline Ultra M3. We first heard of the ultrabook line in January’s CES but this new addition still turned heads during its CeBIT unveiling. A day after it was unveiled, the same laptop was seen on sale at Singapore’s IT Show. The high-performance laptop not only makes multitasking easy but serves entertainment in a stylish nutshell through gaming and DVDs.

Despite its unconventional 15-inch form factor, Aspire Timeline Ultra M3 has a slim 20mm profile with a modern and minimalistic design. The outer cover is made of aluminum alloy which is more sturdy than it looks. Prop it open and you’ll notice that it has a full-sized island-style keyboard for comfortable and efficient typing. People shouldn’t be fooled by its aesthetics though because it packs just as much power within.

Aspire Timeline Ultra M3 meets all other standards of Intel’s ‘ultrabook’ branding. It has a 1.6GHz Intel Core i5 processor and 4GB worth of RAM typically seen in today’s ultrabooks. Maximum screen resolution is 1,366 x 768 which is fair enough compared to others. Connectivity options include Bluetooth, Ethernet, an HDMI port, a USB 3.0 port, two USB 2.0 ports, and 802.11n Wireless LAN. In addition, the laptop has a web cam which can be used for video conferences.

There are several specs and key features that make this ultrabook stand out against its competitors. It is the first ultrabook to have an optical drive, giving users the opportunity to play DVDs. Complementing this feature are two Dolby Home Theater v4 premium speakers. But because crisp audio quality isn’t enough to complement it, Acer placed a graphics card into this ultrabook so it could deliver graphics of the same quality. This makes Aspire Timeline M3 the first ultrabook with a dedicated NVIDIA GeForce GT640M graphics card.

The new Acer ultrabook also packs the latest Intel Core processor. As previously mentioned, it is powered by an Intel Core i5 processor. Gameplay and multitasking are guaranteed by this piece of hardware. Perhaps the ultrabook’s highly-responsive interface proves this. Two of its notable features are “Instant On” which turns the computer back on within 1.5 seconds after coming from sleep mode, and “Instant Connect” which prompts you to connect to the internet and lets you do so in as little as 2.5 seconds.

The high performance Acer Aspire Timeline M3 doesn’t come cheap. It has a substandard battery life of 8 hours. Netbooks like Asus Eee PC 1025C do better jobs at managing battery life but they do lack in performance and could never match the capacity of ultrabooks. Currently priced in the $1000 bracket, Aspire Timeline M3 sorts itself in the midrange category. But its graphics card says otherwise as it is capable of playing games.

Acer announced the availability of Aspire Timeline M3 by this month but we didn’t expect it to show up a day after it was unveiled. The ultrabook was spotted in Singapore’s IT show with a price tag of $1,035 USD.