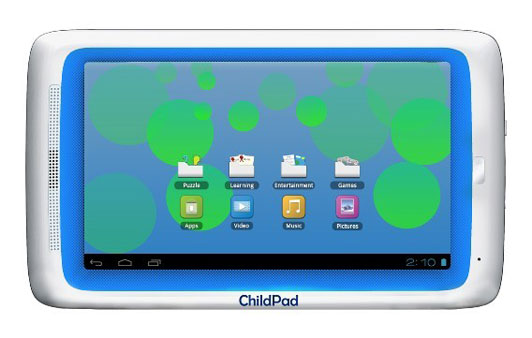 We’ve heard of kid-friendly tablets before. In a nutshell I can describe them as colorful and resistant to dropping and all other abuses kids put them through. But with a price tag of $200 to $300, I have to say it’s a little bit too much for something that only gets slobbered on. Say hello to Child Pad, a considerably priced 7-inch tablet for those of you “with-kids”. For $129, you can keep your kids busy and spare your other gadgets from child-inflicted abuse.

Today, Archos announced what may be the cheapest tablet we’ve laid our eyes on – Archos Child Pad. It has a 7-inch screen and runs Android 4.0 Ice Cream Sandwich. It packs 1GB of RAM and a 1 GHz processor. No word was given on its storage and screen resolution but we might see specs similar to Archos 70b, the $199 7-inch Honeycomb tablet.

Parental control features are integrated to the tablet, allowing parents to limit usability of applications. Child Pad won’t have stock ICS. Archos says they’ve tweaked it by adding a custom skin. Angry Birds and other child-friendly games have been preloaded into the tablet. But if that’s not enough to keep your kids busy, you can always download games at the Android Market. Archos says Child Pad will start shipping by the end of March.

So long in-app purchases, accidental posts on Facebook or Twitter, unwanted internet browsing, additional data charges, and jaw-dropping moments when you find your tablet on the floor covered with snot, saliva, or who-knows-what. $129 is not a bad price for a tablet your kids can call their own.