Trending
You are at:Home»Gadget News»Etcher for iPad – turns your slate to an “Etch A Sketch”
By Gadgetman on May 11, 2012 · Gadget News 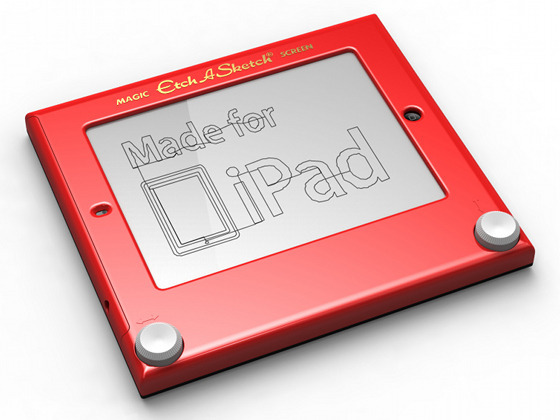 Etch A Sketch used to be one of our favorite past-times as children. This holds especially true for artists – or at least, those of us who tried to be one. Our dependence on technology may be growing over time but nostalgia of the good ol’ days makes us want to go back in time. What if I tell you that you can relive your “Etch A Sketch” days with a gadget? Etcher for iPad does just that.

Etcher for iPad is not just an application. You can get it via iTunes but it doesn’t just recreate the feel of our favorite kids’ toy like EA Games did for Monopoly and Game of Life. Aside from the iOS app available for download, it is primarily a separate case for iPad which gives you the exact same feel of Etch A Sketch. The case has the familiar bright red plastic material and comes complete with knobs for creating vertical and horizontal lines. Once installed, the case collaborates with the iOS app so you can relive your childhood once more.

Sounds too good to be true? You might be interested to know that Ohio Art Company, creator of the original Etch A Sketch, gave the team behind Etcher for iPad their blessings. Pauline Graziano, a renowned Etch A Sketch artist who’s had the hang of it for the past 12 years, agrees that it has the “flavor” of the original and that it stays true to the classic. There’s even a virtual stylus, she noted, which leaves a trace while etching.

When shaken, Etcher for iPad still erases the drawing much like the original. At this point, you’re probably thinking – what good is the iPad if you can’t save drawings? Etcher has that particular advantage over the actual toy, enabling users to save their drawings via the Etcher app and send them over to friends and family. The team behind Etcher intends to start shipping the case starting October but they are still raising funds for their kickstarter project.