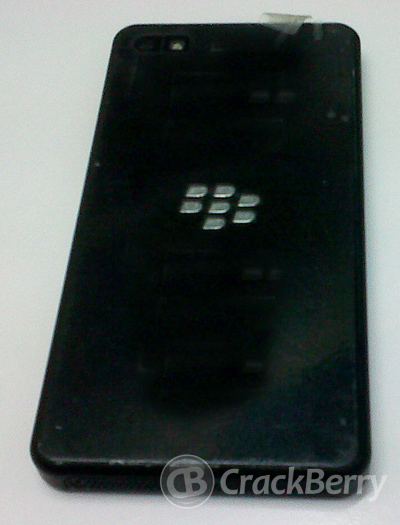 Blackberry 10 is nearing its release and already in beta. It will be unveiled this week at Blackberry 10 Jam, an exclusive event for app developers, as well as Blackberry World. If you could recall, Research In Motion promised to provide developers a device with which they can work on – Blackberry 10 Dev Alpha. Photos of this device started appearing online days ago and were blown away by its form factor. No physical QWERTY keyboards. Blackberry 10 Dev Alpha has a full touch screen. RIM later confirmed it is in fact the developer phone they’re giving away at the Jam. Today, a higher-resolution photo of it got leaked. And it looks stunning.

The high-resolution snapshot of Blackberry 10 Alpha Dev appeared at CrackBerry. The device is turned off so we can’t make much what platform it’s running but RIM said it will run PlayBook OS and not Blackberry 10. For a touch screen smartphone, it looks like a slab due to its thickness but it could be a design sacrifice for a thicker battery. There are no navigational buttons in sight, just the power and volume rocker. From behind, you can see a rear camera and flash discretely positioned on the top left corner of the device and a silver-embellished Blackberry logo in the middle.

Rumors say that Dev Alpha is really Blackberry Colt but we never got to see good photos of that phone which is why it’s hard to tell. But there are a few interesting speculations we could come up with. First of all, the next Blackberry could be a full touch-screen smartphone. Releasing a dev phone with a full touch-screen design only indicates RIM wants devs to work on apps that will be compatible to it. Second, we can hope for a large screen. Blackberry 10 Dev Alpha appears to be larger than 4 inches and screen size is a factor in developing apps. Also, it looks like RIM won’t be including physical navigation buttons on their next Blackberry. It could have touch-sensitive navigation though, similar to those used in most Android smartphones.

Hopefully, user interface of Blackberry 10 is smoother and more intuitive. We will find out more about it at this week in Orlando, Florida where it will be unveiled. And RIM better do something about display resolution if they want to compete in today’s market. RIM continues to lose smartphone market shares in the west and it’s been months since they released a new phone. What about you – are you looking forward to with the next Blackberry smartphone?