Trending
You are at:Home»Laptop Reviews»Vaio T11 and T13 – bringing a touch of Sony style to the Ultrabooks market
By Gadgetman on May 10, 2012 · Laptop Reviews 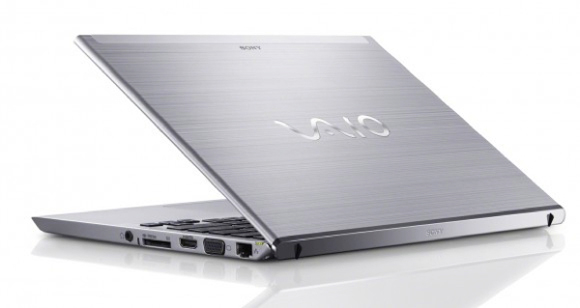 Ultrabooks are finally coming of age, and it looks like they’re really here to replace the mainstream laptops for good – their performance is good enough for most of the tasks that the average user needs to accomplish, and with the higher end processors, it is even possible to do some resource intensive work, as well.

Most of the companies that are active on the mobile market have already released one or more Ultrabooks, with the notable exception of Sony. Until now, that is: the company has revealed the new Vaio T11 and T13 Ultrabooks, and while their tech specs are comparable to the competition, their design is certainly on the exclusive side: Sony’s unique style shines in these devices, as well.

The Vaio T11 and T13 have a pretty unique design that makes them recognizable right away – you sure won’t be able to mistake them for any other Ultrabooks. Sony has had a lot of experience with ultra slim laptops – they’ve practically had laptops that fit Ultrabook specifications for over half a decade, long before the MacBook Air came out.

The typical Vaio design is noticeable on the T11 and T13, as well, with the laptops having squared-off edges all around, a nice metallic body (not unibody, though) and a very interesting display lid construction – when the lid is open, it’s bottom end turns into the rear feet, raising the Ultrabook slightly for more air access to the vent. It will certainly keep the device in place on a desk, but I don’t know how it would work on your lap (probably a lot like Dell’s Adamo XPS).

The hardware is nothing special, but good enough for most tasks

The hardware specs of the Vaio T11 and T13 aren’t all that special. The displays are simple TFT LCD panels, 11.6 and 13.3 inch in size and with a 1366×768 pixels resolution – not the best you can get, that’s for sure. The performance will be provided by a Core i3-2367M processor (an Ivy Bridge option is also highly likely, though not confirmed), 4 GB of RAM and a 128 GB SSD, a HDD if you want more space or a hybrid SSD/HDD setup if you want to get the best of both worlds.

The best thing about the new Vaio Ultrabooks’ hardware (at least for some people) is the port selection: this laptop has 2 x USB ports, a card reader slot, a 3.5 mm audio jack, HDMI out, as well as a full size VGA out and Ethernet ports. On the inside, you’ll find the usual Wifi N and Bluetooth 4.0 adapters, and there’s the possibility that a 3G modem will be integrated, as well.

There’s been no official word on the pricing of the new Vaios, but knowing Sony, they will probably cost around the same price as the (faster and better hardware-wise) competition, which is not really a good thing. The design of the Ultrabooks will appeal to many, though, and if performance is not a priority or you need the VGA and Ethernet ports, the Vaio T11 and T13 may be a good purchase. Both models will go on sale in June, so expect to see more information about them soon.