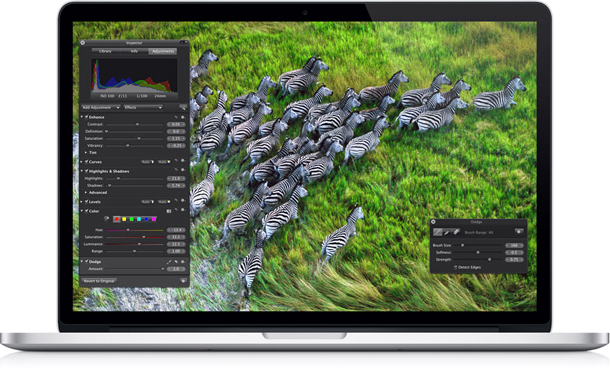 MacBook Pro isn’t the sleekest notebook that Apple has to offer but it packed enough power to fancy photographers, artists, and gamers. This year, they’ve updated their 13- and 15-inch models. Shaking things up a bit is a new 15-inch MacBook Pro with Retina display. While it shares a few similarities with the standard 15-inch MacBook Pro, it’s sleeker and has more memory and storage; and logically, more expensive too. Here’s a quick comparison of all three MacBook Pros of 2011 and 2012.

The standard 15-inch MacBook Pro (2012) mostly features internal upgrades. With that being said, it has exactly the same dimensions and design as the 2011 model. Both measure 0.95 inches thick which compared to MacBook Air is bulky. Compared to the Retina Display variant, these two have every right to be jealous as it is considerably leaner. In terms of weight, I was surprised to learn that MacBook Pro 2011 and MacBook Pro 2012 remain equals on the scale. Meanwhile, the 15-inch MacBook Pro with Retina Display impresses us with its lightweight profile.

The 2012 model of the 15-inch MacBook Pro has the same display resolution as last year’s release. And while it still has a quad-core Core i7 processor, it gains an Ivy Bridge architecture which can be clocked up to 2.7GHz. Ivy Bridge offers better performance and power efficiency than Sandy Bridge. The Retina Display MacBook Pro has the same Ivy Bridge processor as its 2012 counterpart save for the crazy 2880 x 1800 display. Along with the 15-inch MacBook Pro (2012), it also sees an upgrade on the graphics department with an Intel HD Graphics 4000 or NVIDIA Kepler GeForce GT 650M.

To sum it up, the 15-inch MacBook Pro (2012) has better hardware compared to the 2011 model and the Retina Display variant is even better than both of them. The only thing all three have in common is a 7-hour battery life. It is worth noting that the Retina Display found on the MacBook Pro has higher resolution than the one present on the new iPad. This makes the laptop all the more interesting.

Pricing of the new 15-inch MacBook Pro starts at $1,799 for a 2.3GHz Ivy Bridge processor and 500GB hard drive. A ceiling price of $2,199 will get you a 2.6GHz CPU and 750 GB hard drive. The 2011 edition sold for the same prices but with less powerful specs – obviously. These will drop as soon as stores get stocks of the new models.