Trending
You are at:Home»Laptop Reviews»HP Envy X2 – decent specs, great design and Windows 8 in a Ultrabook hybrid format
By Gadgetman on May 20, 2013 · Laptop Reviews

HP is one of the few companies I know of that didn’t get into the consumer tablet game as soon as the iPad and Galaxy Tab proved there is a real market. Well, they actually tried in a very weird roundabout way – instead of doing what everyone does and going with Android, they spent $1.2 billion acquiring Palm in order to have their own OS to compete. Maybe, just maybe it would have worked if they kept at it (webOS was a great OS), but with the change in management and the company’s financial problems, they just dropped everything.

They still released the Slate7 and Slate 500 – two great Windows-based tablets that are aimed at business users, and now it seems that they’re once again trying to expand into the consumer market, as well. Their newest device, the HP Envy X2, is a pretty good entry with some decent specs, Windows 8 onboard and a great design – it looks like it can compete, but let’s take a closer look and see if that’s truly so. 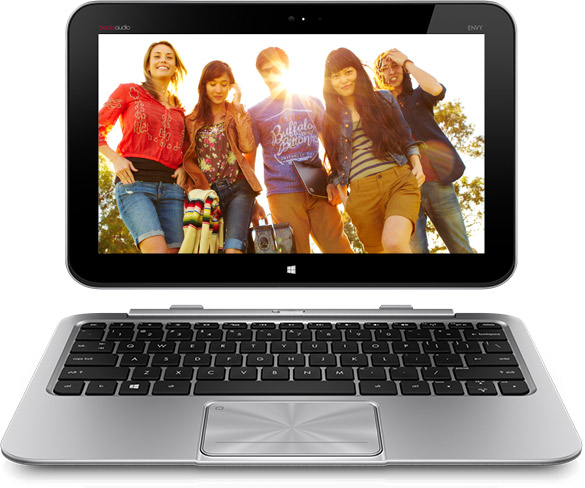 Continuing HP’s tradition with the Envy line, the Envy X2 has a design that really reminds you of the MacBook Air – the aluminum housing, rounded corners, thin profile and tapered edges – it’s all just too similar to ignore. That seems fine for the company (they’ve given up on making excuses about it a long time ago), and it’s most certainly fine for the end users who want a great looking device (having it confused with the MacBook Air or the iPad is only a plus).

Besides that, the Envy X2 is a very solid device – both the tablet and the keyboard dock are all aluminum, with the tablet featuring a strong Gorilla glass on the front. The tapered edges come all the way to the front, making it easy to hold the device with one or two hands. If you think 10.1 inches are just a tad too few for a mobile computer, you’ll also like the 11.6 inch display on this thing. The location of buttons is a bit weird at first, but once you get used to it, you’ll like it – it’s very easy to click them while holding the device naturally – they’re literally at your fingertips. 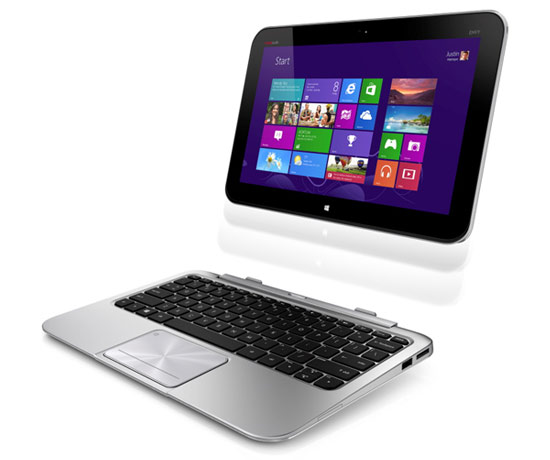 The dock provides additional battery life (in fact, it doubles it) and ports, and the docking mechanism is very secure – once you see it in action, you’ll have no doubt the tablet will stay secured no matter how you use it. It also looks really well when docked – just like a real non-hybrid netbook/Ultrabook.

The HP Envy X2 has the same hardware as other Atom-based Windows 8 tablets and hybrids (like the Asus VivoTab, Lenovo ThinkPad Tablet 2 and others), and as such it performs more or less identically. The 11.6 inch display has an IPS LCD panel, so the colors and viewing angles are great. The LED backlight is more than adequate, as well, but the size may be an issue with some people and an advantage for others – at 11.6 inches and 1366×768 pixels, the Envy X2 has a lower pixel density than 10.1 inch tablets with the same resolution, but you do get larger images and text. Still, I think the density is good enough – it’s similar to that of the 11.6 and 13.3 inch MacBook Airs, and people love those.

The performance is provided by… you guessed it, the Intel Atom Z2760, which seems to be the dominating chip for this half of the year (mostly for the lack of an alternative). It’s nowhere close to the Surface Pro’s Core i5, but then again it uses less than half the power, so it’s a good trade off. With two processor cores and two virtual ones (thanks to Hyper Threading) running at 1.8 GHz, you get more than enough performance for any day to day software and apps, and if you exclusively use Metro apps, you’ll definitely have no issues with it. Legacy X86 software can be a bit slow sometimes, though.

There’s also 2 GB of onboard RAM and the PowerVR SGX545 integrated graphics adapter, which is good enough for apps and Metro UI games, but it’s no match for the Intel HD Graphics 4000 – it’s great as long as you don’t expect it to do miracles.

The Envy X2 has 64 GB of onboard storage on the tablet itself and a full size SD card slot on the keyboard dock, so you can extend your storage space by a significant amount using UHS SD cards – I don’t know whether they would work at full speed, though.

Battery life seems pretty good if you look at the specs sheet – but in reality, it’s quite a lot lower if you use the tablet for more than watching video. If you’re lucky, you can reach 6 hours on the tablet itself and 12 hours with the dock – not that bad, but HP promises 9/18 hours, and other tablets actually get to those numbers, so it doesn’t bode well for the Envy X2.

The other specs are similar to what you’ll see on any other recent tablet/smartphone – dual cameras, Wifi N, Bluetooth 4.0, NFC and GPS, HDMI out and all the necessary sensors.

The HP Envy X2 runs the full-fledged Windows 8, so you can run any software and apps you may need – switching from a laptop/desktop should be almost seamless. The touchscreen-oriented Metro UI is great, though, and you might want to try a few of the apps on the Store – they’re just as good as those on Android and iOS.

The HP Envy X2 is already on sale, but its price might benefit from being a little lower – you can get the whole device (tablet + dock) for $850, which is quite a lot to ask when there are cheaper alternatives around – many people don’t really need the dock or prefer to buy it later. But if style is more important than saving some money, the Envy X2 is definitely one of the best looking and most well built Windows 8 tablets yet.