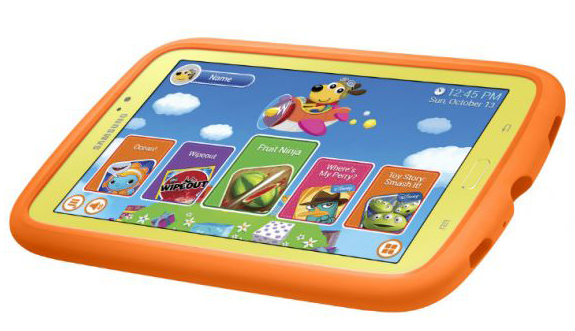 Earlier this year, Samsung made comments about working on a new tablet with a custom made interface designed for children, and releasing it in the “months to come.”

The Samsung Galaxy Tab 3 Kids has now been confirmed to be releasing on November 10th in the United States for just $229.99, making it a suitable Christmas present for the kids. In terms of hardware, the Samsung Galaxy Tab 3 Kids is almost identical to the standard 7 inch Tab 3 tablet, although it has been given a more bright and colorful chassis, and a rubber bumper casing to protect it from drops and falls.

However, the main attraction of the Samsung Galaxy Tab 3 Kids is the custom-made software that has been specifically designed for children in mind. Whilst it offers a standard TouchWiz mode as well, it also has a “kids mode” that simplifies the UI, makes everything look nice and colorful, and allows parents to restrict access to certain apps and functions.

The Samsung Galaxy Tab 3 Kids will also come pre-installed with a few games, including Fruit Ninja, Where’s My Perry and Kids Planet Discovery.

The parental controls also allow parents to start a timer to “lock” children out of the tablet after a certain amount of time has passed, preventing children from playing on the tablet 24/7.

Once your child has done with the tablet, you can also easily switch it straight back to the standard TouchWiz interface and use it just like you would use any other standard Android tablet with no restrictions on apps or other kid-friendly bloatware getting in the way.

This is probably the greatest feature that puts the Samsung Galaxy 3 Kids on a pedestal above other kid-friendly tablets, and allows a whole family to share the experience without any limitations.