Trending
You are at:Home»Gadget News»Samsung New 4GB RAM Could be Used in Smartphones Next Year
By Gadgetman on Jan 1, 2014 · Gadget News 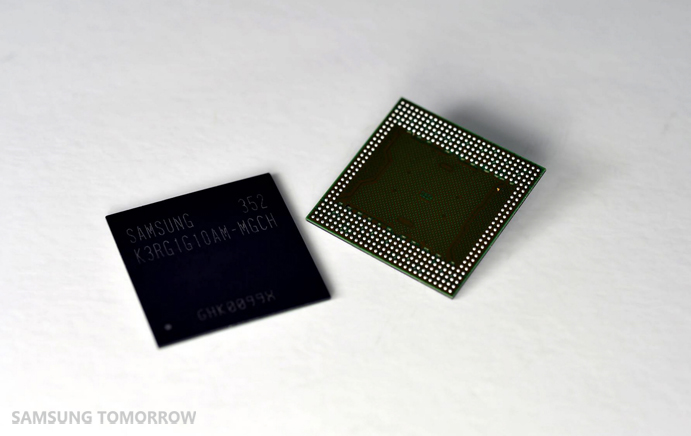 It’s a common myth that Bill Gates once said computers would only ever need 640Kb of RAM, but it’s clear, many years later, that this certainly isn’t the case. Most PCs and high-end laptops now come packed with 8GB of RAM, and some high power PCs now go up to 16GB or 32GB of RAM.

The same growth is happening for the memory department for smartphones and tablets; for example, the T-Mobile G1, the first commercially available Android smartphone, was manufactured by HTC and it came with less than 200MB of RAM.

Fast forward five years, and we now have devices touting up to 3GB DDR3 RAM, and whilst this is pretty impressive as it is already, next year, Samsung will have something even greater in store for us.

Samsung has just unveiled a new 8 gigabit (1GB) chip which is incredibly power efficient, and is using the first ever mobile DDR4 technology, making it more powerful than the previous DDR3 3GB RAM available in devices like the Galaxy Note 3. Four of these 8 gigabit chips combined will make it the first mobile 4GB RAM chip available.

According to Samsung, the new mobile 4GB RAM chip will have a 50% gain in performance when compared to it’s 3GB precursor, but more importantly, a massive 40% decrease in power consumption. We all know smartphone batteries just don’t deliver to a high enough standard, and with the introduction of QHD displays next year, we are going to need more energy friendly chipsets like this.

Samsung said the new mobile 4GB RAM chip will start production in 2014, so it’s unlikely it will make it into the Galaxy S5, but it will probably make a debut in the Galaxy Note 4, especially seeing as Samsung’s first 3GB RAM device was the G Note 3.