Trending
You are at:Home»Gadget News»HTC One Now has Moto Maker-like Double Dip Cases
By Gadgetman on Feb 16, 2014 · Gadget News 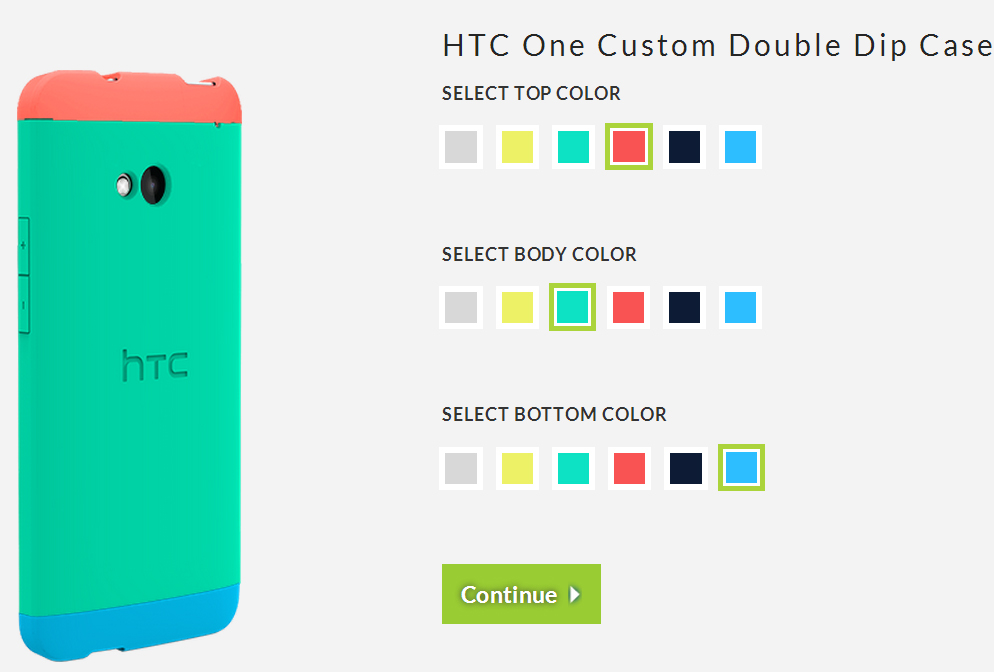 Even though the 2014 flagship for HTC is most likely only a month or two away, HTC still seem to be putting focus into the HTC One – the flagship for 2013.

If you don’t believe me, this new campaign by HTC will make it obvious to you that HTC still see value in the HTC One smartphone, and it’s just another business practice by the company that makes them stand out a little.

I’m not sure if I should applaud HTC for this, or furrow my eyebrows in confusion, but HTC has announced a new scheme called Double Dip cases that allows HTC customers to build their own HTC One case by mix and matching different colors. It looks very similar to the Moto Maker program, although instead of creating an actual smartphone, only a case is being created.

There are six different color choices in total – pastel blue, navy blazer, glacier gray, neon lemon, atlantis and bright peach. HTC customers will be able to choose three different colors for their handset case, one for the top, one for the bottom and one for the main body of the device, meaning that there are plenty of variations to create.

A Double Dip case does look quite cool and very colorful, but it will set you back $29.99 if you plan on buying on. On top of this, having only six colors is a little off putting, especially for those who may not like the bright block colors.

I’m sure if more colors were added for the Double Dip cases, and this program was created for the HTC M8, then it may actually gain some traction. Unfortunately, just like the moto maker campaign, this has been limited to just North America for now. No details have been given on any other region availability.