Trending
You are at:Home»Uncategorized»Memory Technology Breakthrough Announced by IBM
By Gadgetman on Dec 26, 2010 · Uncategorized 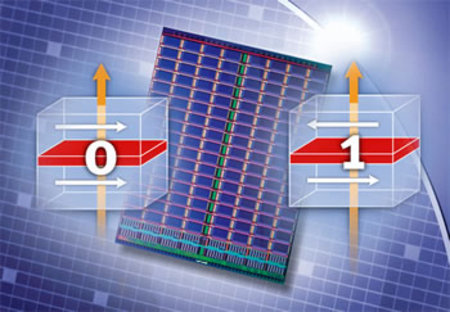 IBM recently announced that it is developing a new type of ultra-low-cost solid-state memory featuring a storage capacity that exceeds everything what today’s hard disk drives can provide.

The new technology is called racetrack memory and is hoped to, one day, replace hard disk drives in PCs, laptops and servers as well as displace flash memory chips in smartphones, digital cameras and tablets.

The new storage memory is based on technology known as Spintronics, which manipulates the two types of independent electrons found in electrical current, called the ‘Spin-Up’ and ‘Spin-Down’ electrons. The aim is to enable computing devices to store bits of information by manipulating the magnetic state of a region within a nanowire that is only a few tens of nanometers wide.

Current hard disk drives remain popular due to the fact that they are affordable, but today’s technology is prone to read/write errors and may suffer irreparable damage if dropped or hit. Solid-state memory chips, however, are superfast and more reliable, but they may cost 100 times more per gigabyte of memory than conventional hard drives.

Nanowire racetrack technology will bring the benefit of solid-state construction to PC and server memory storage without a comparable boost in price, according to IBM. They also added that in the near future, even handheld devices and cameras may be available with astounding amounts of storage memory.

IBM stated that their goal is to boost device storage capacities by a factor of 100 times greater than what is currently available today. Their aim is to see a portable device capable of storing all movies produced worldwide in a year, with some room to spare.

IBM researchers have published their findings in the Dec. 24 issue of Science. The research is entitled: “Dynamics of Magnetic Domain Walls Under their own Inertia”.