Trending
You are at:Home»Uncategorized»Reeder Calls Out Design Theft by MobileRSS
By Gadgetman on Dec 23, 2010 · Uncategorized 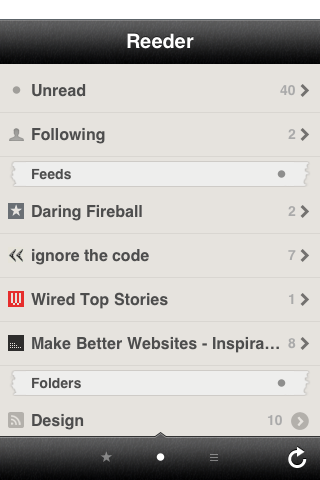 Reeder is a well-known RSS application, which brings usability and elegance to RSS feeds in devices such as the iPhone, iPad or the Mac, and used by millions of users from around the world. Earlier this week developer, Silvio Rizzi, noticed that the exact design of his program is being used by competitor, MobileRSS.

Rizzi created a page on his website, showing a side-by-side example of how bad the rip-off was and quickly gathered support from many users.
The publications of the design theft by Rizzi lead to popular online bookmarking service, Read It Later, to disabling the MobileRSS API Key from its service, even though MobileRSS is the world’s third most read RSS service.

Today MobileRSS responded to the allegations and agreed to remove all similarities.

According to a statement: “We are submitting an update to MobileRSS immediately which will include modifications to the UI elements that most mimic Reeder. We respect the work that Reeder has done but are most concerned with serving users and improving MobileRSS for everyone. These improvements include ideas pioneered by Reeder, but we have current and upcoming features which are unique to our app not found in other RSS readers.
But to be clear, we’re taking immediate action to correct this and will remove the similarities to Reeder at once.
MobileRSS developers”
At the time of writing various changes have been made to MobileRSS.