Trending
You are at:Home»Uncategorized»Smartphones Could Reach Half Billion in Sales in 2011
By Gadgetman on Dec 27, 2010 · Uncategorized 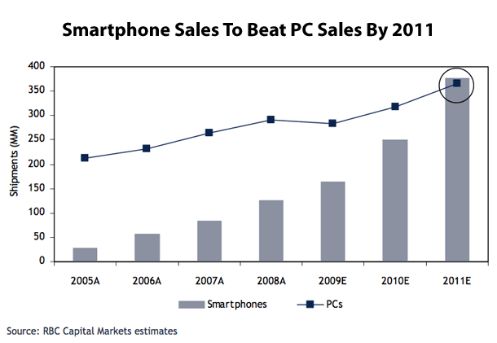 According to statistics, 2011 is looking like a good year for smartphones when retail prices could drop to $100 and less. The results will likely be that smartphone sales will bypass the half-a-billion mark, according to market research firm IDC.

According to Seth Weintraub, in Fortune, the acceleration in 2011 will be fueled by improved wireless networks and cheaper hardware prices. This will, in turn, lead to improved competition between carriers and spur them to improve their current networks.

Jim Tran of Business for Broadcom, global leader in semiconductors for wired and wireless communications, also told Fortune that phones made from its chipsets will retail for under $100. According to him these low prices could open emerging markets in Asia, which will create a huge demand.

We look forward to what next year brings in terms of lowered smartphone prices.