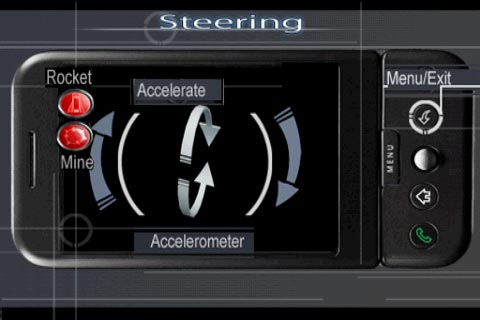 SpeedForge 3D gives you six different locations in outer space over which to race. It uses your handset or Android tablet’s accelerometer to provide plenty of feedback as you crash into things while hurrying along. We found ourselves squealing with delight when we experienced our first wipeouts. When you smack into something, you don’t just get the odd knock along the way but a plethora of explosions and a wildly vibrating handset.

Once you’ve got the hang of things, the competitive element kicks in. To win the time trials you’re encouraged to get other racers off your tail by hurling mines and missiles. Of course, they’re just as likely to try the same with you.

The excitement is only limited by the fact that these aren’t real online players, which is a shame given the potential of the environment. Taking advantage of the faster 1GHz processors and larger screens in today’s devices, the 3D effects and physics are surprisingly good even at breakneck speeds. But without fellow players, it all feels a bit lonely.