Trending
You are at:Home»Android»Google’s Android Music 3.0 app leaks
By Gadgetman on Apr 6, 2011 · Android 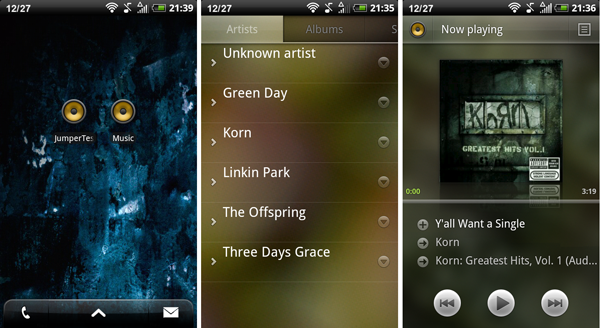 On April 5, 2011, the Internet got a preview of Google’s new Android Music app (Android Music 3.0) as the software was leaked on the web. The app is said to be quite similar to Amazon Cloud and was apparently leaked on Techfrom10.com, prompting the site to go down due to too much server traffic.

It is unclear how Techfrom10 came to obtain the Android Music 3.0 app but according to a statement on the site, they somehow tapped into a test market and the music player was embedded with the other programs. Though they tried to correct the error, they said they couldn’t so instead they took some screenshots to share what the Android Test Market is like. The developer version gave viewers a preview of what is waiting in the future.

TechFrom10 reported that they were aware they had accessed the app test market as many of the apps were labeled with “test.” Additionally, they said they were able to view the recently announced content rating area that Google had indicated would be coming soon.

According to TechFrom10, the new Android Music 3.0 app is similar to that of the Honeycomb music player; however they said it is far better than the current music player Android 2.3. They installed the player and tested it out and apparently were quite impressed with its performance. Tech From 10 stated that eh Android Music 3.0 app was similar to that of 2.1 and though they could see that it came with the Google Music cloud service, they were unable to access any accounts to test that service further.
By the end of the day, TechFrom10 reported that Google had removed the test market from their device.