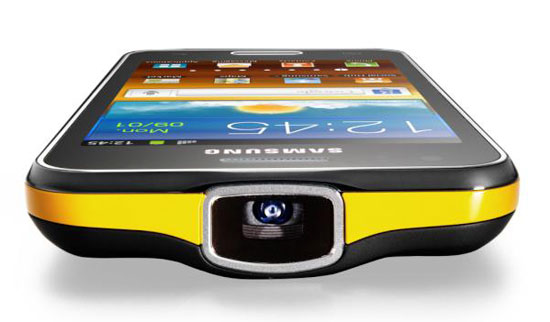 In less than 140 characters, Samsung Mobile announced Galaxy Beam on Twitter – the first Android smartphone with a 15-lumen projector capable of projecting 50-inch images and videos. With the hash tag #MWC, it seems like Samsung is showing up at the Mobile World Congress after all, contrary to an earlier rumor that they’re skipping this year’s most awaited tech event.

Samsung Mobile introduced Galaxy Beam on Twitter a few hours ago, one day before the Mobile World Congress in Barcelona, Spain. It is no rumor or speculation. This is the real deal folks. The tweet came with a photo showing the phone’s projector on its top side. To be honest, the tweet made me more queasy than excited.

I’m not sure what a projector’s use will be with Samsung Galaxy Beam or any smartphone for that matter but I’m guessing it’s a way people can share photos and videos to larger crowds on a wider screen. It may have a 4-inch display but with its HD projector, a user can easily share captured moments to a larger group of people in vivid display.

The phone has mid-range specs with its 1 Ghz dual-core processor, 800 x 480 screen resolution, HSPA-only support, 8 GB of internal storage, and 5MP camera. It will run on Android 2.3 Gingerbread. Its design looks cheap and reminds me of Samsung’s low-end devices. Really, Samsung? You just had to splash yellow on Galaxy Beam’s plastic cover? I’m skeptical of this phone’s battery use when the projector is turned on though. Dual-core processors are battery hogs compared to quad-core processors like Tegra 3.

The thing is, we’ve never heard of an Android smartphone with a projector until now. So let’s all stay tuned for tomorrow’s Mobile World Congress and see what the Galaxy Beam has in store for us.