Trending
You are at:Home»Android»How to get WiFi tethering on your Android without root
By Gadgetman on Mar 19, 2012 · Android 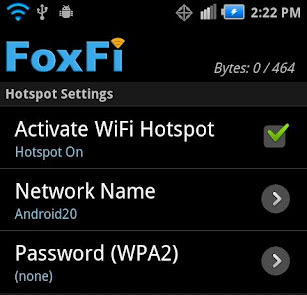 Not all Androids are equipped with tethering. Tethering lets you turn your Android into a Wi-Fi hotspot so you can connect Wi-Fi capable devices to it. While it requires an active data connection, you can exploit an unlimited data plan and connect all your internet-capable devices to it via Wi-Fi hotspot. You can cut your data charges and save money with this feature. Not surprisingly, US carriers got all greedy and decided to lock away this feature. The only way to unlock it would be to root your device and throw away your warranty, or pay for that tethering plan which you initially wanted to avoid. But you don’t have to do any of these, thanks to FoxFi.

Several apps on Google Play let you turn your Android into a Wi-Fi hotspot despite carrier limitations. They let you consume all the data you want on multiple devices with the help of tethering. Unfortunately, all of them are root-only apps which require you to root your device in order for them to work. If you’ve been holding on to your precious warranty, it’s more likely that you never went out of your way to root your Android.

Now there’s a new application on Google Play that doesn’t require you to root your device, much less break its warranty. Called FoxFi, it gives your phone that tethering capability you’ve been longing for without having to root it. You can choose between two modes – Bluetooth and Wi-Fi.

Most Motorola and Samsung phones are compatible with Wi-Fi mode, with the exception of Motorola Droid 1, Motorola Triumph, and Samsung Admire. But Wi-Fi tethering doesn’t work for all HTC phones. If you’re having difficulty with Wi-Fi tethering, you can always opt for Bluetooth mode since the feature works for all phone models.

For more details, check out FoxFi by FoxFi Software at Google Play. The app is free which makes it all the more enticing. There’s a chance that Google might pull it out of the market so grab it while it’s still up.