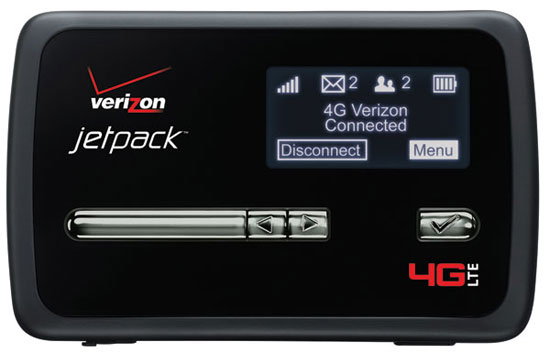 Barely halfway through the year and we couldn’t help but notice that 2012 is the year of 4G technology in the US. LTE is a year-old service but US carriers like AT&T and Verizon have been actively pushing it – from releasing 4G phones to expanding in more territories. Today, Verizon announced a new product that takes advantage of their network’s 4G speeds – Jetpack 4G LTE MiFi 4620L. It acts as a 4G LTE hotspot so you could connect multiple devices at one time.

Jetpack 4G LTE MiFi can be taken anywhere you go. When turned on, you can connect up to 10 devices to it and have them all use the internet at the same time. At first glance, it looks like any other MiFi out there. But it’s miniature OLED display makes reading, navigation, and selection easier for everyone. It primarily works on Verizon’s 4G network but 3G connectivity is also possible in over 125 countries.

Novatel Jetpack 4G LTE MiFi will start selling two weeks from now on April 12th. The unit will cost $49.99, tagging along a two-year contract with Verizon. Of course, you’ll have to pay extra for data packages which starts at 5GB per month for $50. It was an impressive find at CES 2012 and a must-have for people who travel and own multiple devices. It’s also a great catch for people who want to spare their smartphones from the battery drain which tethering causes. The MiFi has a long 8-hour battery life enough for reading emails and accessing social networks on a busy day.

Verizon’s 4G services are currently available in 200 regions. They aim to double that to 400 regions by the end of 2012. When that time comes, Novatel Jetpack 4G LTE MiFi along with other LTE-capable smartphones are going to invade these cities. In two or three years time, most of Verizon’s customers will have fully embraced the technology.