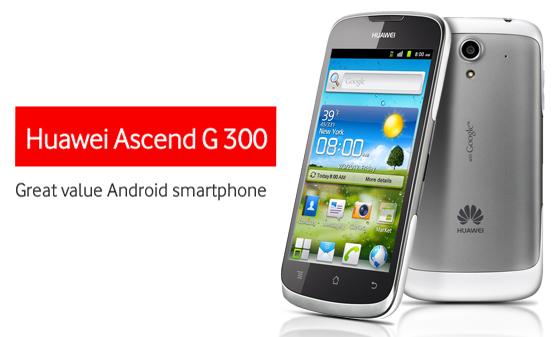 Vodafone UK today announced Huawei Ascend G 300, a budget Android smartphone. The handset is exclusive to the carrier and is expected to hit stores soon – likely before summer ends. Until that day arrives, we only know little of its specs. But it looks promising coming from an emerging brand such as Huawei.

Huawei Ascend G 300 has a generous 4-inch display. Now that’s a spec we usually don’t expect from cheap Android smartphones as they usually border on 3 inches. Display is also touted to be vivid despite its limited 480 x 800 resolution. Ascend G 300 also has a single-core 1GHz processor, 5-megapixel camera, WiFi connectivity, 2.5GB internal storage, and an expandable storage of up to 32GB. The device is impressively light at 130g even though Vodafone says it has a long battery life. To be exact, it has a 1500mAh battery enough to last you a day with these specs.

Ascend G 300 may be on the entry-level range but it doesn’t look cheap at all. It has a white and chrome finish that looks elegant, even resembling HTC phones at some point. Buttons for power and volume control can be found on the sides and don’t protrude much. No physical buttons upfront but there are three touch sensitive controls below the screen for navigation.

The phone is shipping with Android 2.3 Gingerbread when it hits stores but Vodafone promises an ICS update this summer. Vodafone UK is offering Huawei Ascend G 300 to Pay-As-You-Go customers for £100. The catch? You need to sign up for a £10 top-up. If you opt for the £15.50 top-up with a two-year contact, you can get the phone for free. The £15.50 top-up covers 500 texts, 100 minutes worth of calls, and 250MB of mobile data.