Trending
You are at:Home»Android»How to install S-Voice .apk on your Android phone
By Gadgetman on May 20, 2012 · Android 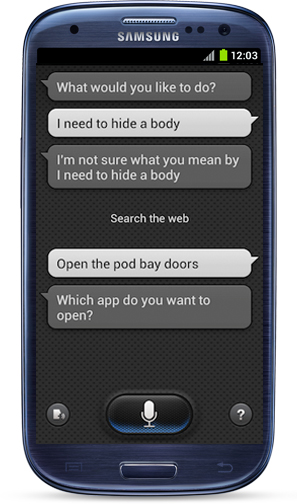 S-Beam, Smart Alert, Smart Stay, Direct Call, and Social Tag are among the features of Samsung Galaxy S3 but the coolest feature of SGS3 would have to be S-Voice which is what Siri is to iPhone 4S. Like Siri, it acts as a personal voice assistant and lets you take control of the Galaxy S3 – hands-free. Thanks to Ascarface23 of XDA Developers, S-Voice can now be installed on your Android. For the record, the S-Voice installer only works on devices running Android 4.0 or higher. Also, your device needs to be rooted. Otherwise, you’ll have to wait for it to get ported to Gingerbread and older versions of Android.

Ascarface23 extracted the .apk file of S-Voice which allows it to be installed on ICS devices other than Samsung Galaxy S3. In case you haven’t head, sources of Samsung Galaxy S3 were released for developers to tear apart and feast on. There are two ways to install the S-Voice .apk – you can either install it using the Android package installer like you would with any third party app, or you can install it as a system app. The preferred method is to install it as a system application.

How to install S-Voice (Preferred)

1. Download voicetalk.apk
2. Using a file manager of your choice, copy and paste the downloaded file from Step 1 to system/app
3. While in system/app, long press the .apk file.
4. When prompted, select “permissions” and change to r-w, r, r
5. Reboot your phone
6. Using a file manager, go back to system/app and confirm installation when prompted.
7. After successful installation, your device now has S-Voice!