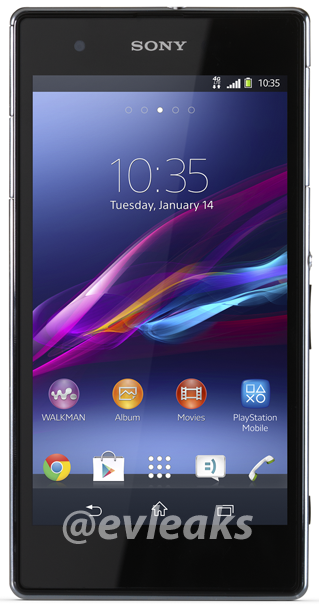 After hearing reports of a smaller version of the Xperia Z1 hit Japan as the Z1 f, it has been strange not to hear from Sony about a similar model being released to the rest of the world.

However a new leak seems to suggest that an Xperia Z1 Mini worldwide model may be coming. The leak comes straight from @evleaks, who when considering their previous history for leaks, are probably the most spot-on leak source known to the smartphone market.

I have to give it to Sony for being the first manufacturer to offer a smaller device actually worth buying. Both Samsung and HTC have now released ‘mini’ variants of their flagship devices, and in their case, along with a cut in screen real estate comes a huge cut in hardware performance, and this is slightly shocking when considering the fairly premium price point of these handsets.

The display will also be of HD resolution, instead of full HD, meaning we’ll probably have a fairly decent 300ppi+ screen on the Z1S.

This doesn’t have to be a bad thing though, as a reduction in screen size and display resolution will somewhat improve performance and increase battery life, as there will be less pixels to push.

Hopefully the Sony Xperia Z1S will have a price similar to the Galaxy S4 Mini and HTC One Mini, as this would make it a very interesting handset to watch out for.

Seeing as Sony has a strange release schedule that is usually out of sync from other manufacturers, it’s hard to tell when the Xperia Z1 Mini worldwide model will be available for purchase, but the January 14 date on the leaked image of the handset may have something to say about it.