Trending
You are at:Home»Gadget News»Gold HTC One Going into Mass Production
By Gadgetman on Nov 26, 2013 · Gadget News 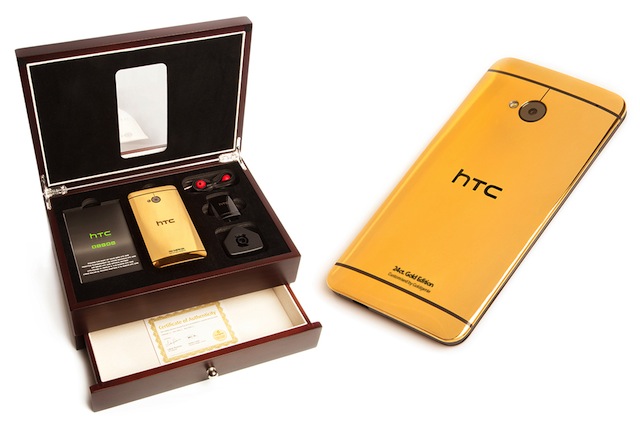 After teaming up with a gold plating business and releasing a very limited supply of 18K gold HTC One handsets for the British music MOBO awards, HTC has decided that’s it’s time to fully follow suit and release a gold HTC One for the general public.

Unlike the full gold plated device, the new gold HTC One will undergo a lick of paint to receive the shiny golden color, making it a possible purchase for anybody that thinks owning a gold painted smartphone is cool.

Earlier this year Apple released a gold iPhone 5S, and since then HTC has become the second smartphone manufacturer to do the same.

Samsung first released a gold variant of their 2013 flagship device, the Samsung Galaxy S4, and despite struggling with revenue profits, now even HTC has decided to follow the gold rush and they have now confirmed and announced a brand new gold HTC One device.

The gold HTC One has been specifically manufactured to mark the festive season, which, when seeing the smartphone, makes a little more sense. Although availability for after the Christmas season hasn’t been confirmed or denied, it’s likely this will be a device that is available exclusively for the Christmas holidays.

So far the gold HTC One has only been confirmed for a Europe release, and HTC hasn’t commented on whether it will make it to any other regions.

If you were hoping to grab a gold HTC One and you’re living elsewhere, keep your eyes peeled as a more international release may hit stores some time before Christmas.

Pricing hasn’t been revealed yet, but it’s likely to cost a similar price to the standard HTC One considering that the hardware and software is practically identical to the standard color versions that were released earlier in the year.