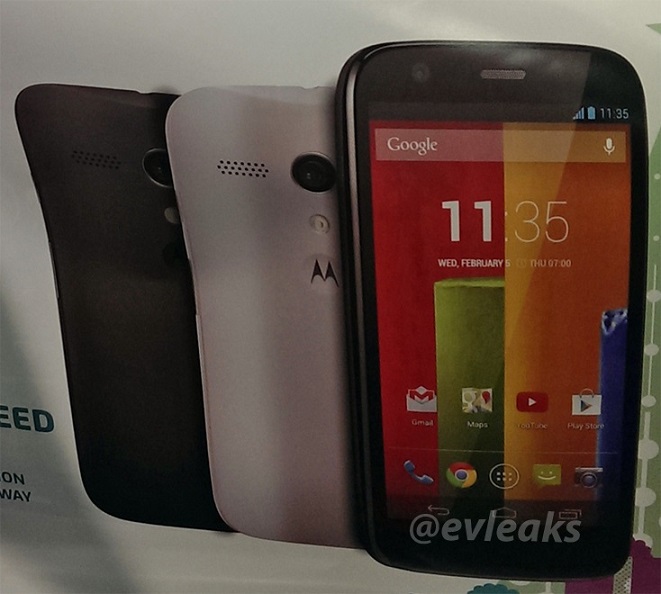 There has been talk recently of a new Moto G handset, however there hasn’t been any official word on such a device. Recently we learnt that the Moto G could be a more affordable “mini” version of the Moto X, and a new leak from popular leaker @evleaks seems to suggest this too.

According to a post made by @evleaks on twitter, the Motorola Moto G will have a Snapdragon S4 Pro SoC with a 1.5GHz quad core processor, a 4.7 inch 720p display, an 8 Megapixel camera, 8 or 16GB of storage depending on model, and a fairly small 1,950mAh battery.

On top of the @evleaks tweet, a leaked Phones4U promo card has been shown off by a GSMarena tipster with some conflicting information on the new Motorola Moto G.

Nearly all of the hardware specifications mentioned by @evleaks were different on the GSMarena leaked Phones4U promo card. The specs for the Motorola Moto G according to the promo card are shown below:

Details weren’t given on the capacity of the battery for the Motorola Moto G, and no explanation was given for the water repellent coating, although the promo card did reveal that the Moto G could start at a very cheap £134.95 (around $200) price point.

Any details right now about the Motorola Moto G should certainly be taken with a grain of salt though, as both the @evleaks leak and the GSMarena promo card leak look fairly legitimate, but it’s clear that only one of the two can be showing the real hardware specifications for the handset.

Either way, it seems as if the Motorola Moto G will be a decent handset aimed for those on a tight budget.