Trending
You are at:Home»Gadget News»Sony Xperia Z1s Shown in Full Glory Alongside the Xperia Z1
By Ollie Green on Nov 18, 2013 · Gadget News 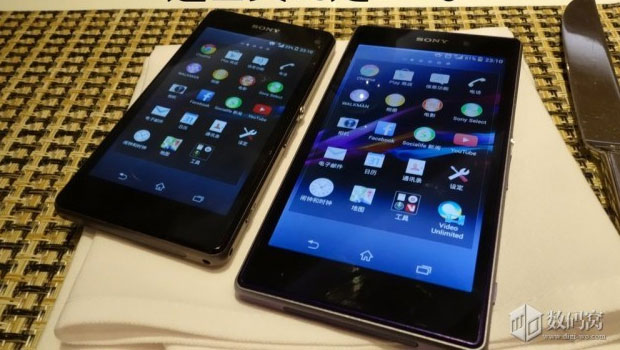 The Sony Xperia Z1s is a handset that has been described to be a “mini” variant of the rugged waterproof and dust proof Z1 handset. However, unlike many other mini variants currently on the market, Sony have reduced the screen size in the Xperia Z1s without making a negative impact on the Z1s’s performance.

A new picture has been doing the rounds on the internet that shows the Xperia Z1s in all it’s glory alongside it’s bigger brother, and like rumors suggested, the screen size difference is clear, although everything else about the handset is very similar to the full sized version.

After hearing previous leaks and reports, it’s also likely that the Xperia Z1s will come packed with the same 20 megapixel camera that is found within the Z1, and that it will also have waterproof and dust proof capabilities, making it stand out from the crowd of other mini variant devices.

Seeing as the Z1 Mini in Japan has the same specifications as the Japan model of Sony’s Z1, it’s very likely that the hot topic Xperia Z1s will also have a powerful Snapdragon 800 processor, which is currently the most powerful chipset available in devices today and is used in handsets like the Nexus 5, LG G2 and Galaxy Note 3.

Unfortunately at this time no official information has been given on the Xperia Z1s from Sony, but the image of the device alongside the full sized variant clearly show that there is such a device in the works, and it won’t be very long at all before it’s released to international markets.